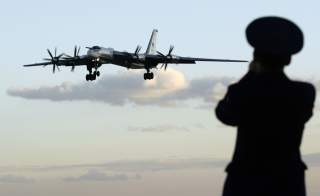 “The exercise focused on practicing the coordination between Russian Strategic Missile Troops, nuclear submarines of the Northern and Pacific fleets, and strategic aviation of the Russian Aerospace Forces,” reads a statement from the Kremlin.

The Russian defense ministry offered a few more details about the exercise, but did not identify specific systems.

“A squad of the Strategic Missile Force fired a Topol intercontinental ballistic missile from Plesetsk towards the Kura test range in Kamchatka," the Russian Defense Ministry told the Russian state-owned TASS News Agency.

“The exercise involved a launch of a Topol/SS-25 ICBM from Plesetsk. The warhead is said to successfully reach its target at Kura,” Podvig wrote.

“The three SLBM launches were a salvo launch of two missiles from the Sea of Okhotsk to the Chizha test site and a launch of an SLBM from the Barents Sea to Kamchatka. The official report does not provide any information about submarines and missiles involved, but the video shows that all three SLBMs were liquid-fuel missiles. This means that the Okhotsk Sea salvo involved two R-29R missiles launched from one of the Project 667BDR/Delta III submarines. The Barents Sea launch was that of a R-29RM Sineva from one of the Project 667BDRM/Delta IV submarines.”

However, the ballistic missile test launches were only part of the exercise. Russian bombers including Tupolev Tu-160 Blackjacks, Tu-95 Bears and Tu-22M Backfires also participated in the war-games.

“Strategic bombers Tupolev-160, Tupolev-85MS and Tupolev-22M3 were also engaged in the exercise,” the TASS report states.

“They took off from the main base in Ukrainka, Engels and Shaikovka and launched air-based cruise missiles at ground targets at Kura, Pemboi testing range in the northeastern region of Komi, and Terekta in Kazakhstan.”

While the Russian exercise was massive in scale, Podvig notes that these are regularly scheduled annual exercises.