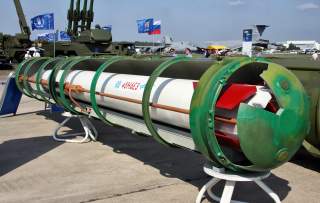 Russia has delivered to China its first regiment of S-400 surface-to-air missile batteries. Moscow signed a deal with Beijing to sell China the potent weapon system in 2014.

"Two vessels have delivered the first regimental set of S-400s from the port of Ust-Lug, Leningrad Region, to China within the time limit established by the contract. It includes a command post, radar stations, launching stations, energy equipment and other property. It lacks the equipment that was onboard the third vessel," a Russian defense source told the TASS news agency. "The work continues, and the missing equipment is expected to be delivered to the customer in the summer."

A third vessel carrying additional hardware was caught in a storm enroute from Russia and had to turn back. It appears that the weapon system will not operable until the missing hardware is delivered.

"A priority task in the sphere of military technical cooperation is the implementation of the contract for supplies of S-400 Triumf missile systems to Turkey," Russian president Vladimir Putin said during of the Russia-Turkey Cooperation Council according to TASS. "We hope that the sectoral intergovernmental commission will look into the prospects for further supplies of Russian-made military hardware to Turkey at its next meeting.”

Russian presidential aide Yuri Ushakov told TASS that Moscow would do everything possible to deliver the S-400 to Turkey—which has already made a down payment—by 2020. "Turkey did raise this issue. As far as I know, steps will be taken to meet Turkey’s wish," Ushakov said.

Turkey, for its part, is determined to buy the S-400 despite the threat of sanctions by the United States.

“The U.S. understands Turkey’s desire to improve its air defenses,” a Trump administration official told the Hürriyet Daily News. “But we are concerned and have said so publicly about potential acquisition of Russian S-400 missiles, which would have implications for NATO interoperability and which would potentially expose Turkey to sanctions due to the new sanctions law recently passed by Congress.”

Turkey points out that NATO allies did not pressure Greece to drop its S-300 purchase in previous year, though that deal came under during a much less antagonistic period in the West’s relations with Russia.

“You’ve said nothing to Greece but you said that you will not let Turkey acquire S-400,” Turkish president Recep Tayyip Erdogan said according to the Moscow-based TASS news agency. “You claimed that the contact with Russia was a mistake. You also said that you might introduce sanctions. We are not going to be accountable to you. We will proceed along the right way without any concessions for the sake of achieving our own goals.”

As with many other nations, the Turks are concerned by the U.S. Congress’ infringement on their sovereignty. More often than not, Congress passes laws where the lawmakers—who often maintain a well-educated but very inexperienced staff—fail to consider the second and third order consequences of their actions.