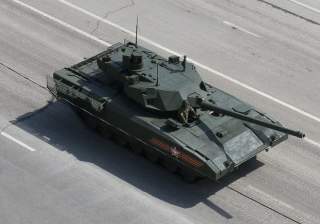 The Russian Ground Forces are set to take delivery of the first production models of the T-14 Armata main battle tank starting in 2017.

The Russian army has taken delivery of twenty pre-production version of the tank for operational testing—which is currently under way just outside Moscow at Kubinka. The first operational T-14 unit is likely to be stood up in Siberia with a unit that performed particularly well during the invasion of Crimea according to a source.

“Test of the Armata are going according to schedule without any problems,” Alexei Zharich, deputy director of Uralvagonzavod told the Russian language daily Izvestia. “Serial deliveries could begin at any moment—as soon as the customer wants it.”

However, Zharich seems to be addressing only the T-14 main battle tank variant. He didn’t address the other combat vehicles that are part of the Armata family—it’s not clear if those vehicles are also in production. The Armata Universal Combat Platform consists of the T-14 main battle tank, the T-15 heavy infantry fighting vehicle and the T-16 armored recovery vehicle, among a host of other vehicles. Another member of the Armata family includes an upgunned heavy assault armored vehicle, which has been dubbed “the Tank Killer” by Russian media. The “Tank Killer” variant seems to incorporate a derivative of the 2S35 Koalitsiya-SV’s 152mm artillery piece into the Armata chassis in a direct fire mounting.

Izvestia also reveals some additional details about the T-14’s new 2A82-1M 125mm gun—which is mounted in an unmanned turret. The Russians expect that the new weapons outperform all other existing tank cannons by at least twenty percent. According to Russian estimates, the 2A82 cannon produces 1.17 times greater muzzle energy than the Rheinmetall 120mm L55 gun, which is mounted on the latest versions of the Leopard 2 (the M1A2 Abrams uses the older, less capable L44 version). However, the Russian gun is two feet or sixty centimeters shorter than the German-made weapon—which is a significant advantage.

There are also some additional details about the Armata series’ Afghanit active protection system (APS). The system—which uses a 360 active electronically scanned array radar—can simultaneously track 40 ground targets and twenty-five aerial targets within a radius of 60 miles. It can automatically detect and engage targets that are only a foot-long—such as an incoming anti-tank round, Izvestia reports.

The Afghanit system includes a potent electronic warfare system to disrupt the guidance systems of incoming rounds. But it also has a countermeasure suite to jam enemy laser guidance systems. Moreover, the tank is equipped with interceptor rounds for the APS, which are fitted with explosively formed penetrators. That means the Armata’s APS could potentially be effective against even kinetic energy rounds. APS systems are usually most effective when used against chemical energy rounds like rocket-propelled grenades or missiles.

Should an incoming round makes it through the APS—the vehicle is protected by dual-layered Malachit explosive reactive armor in addition to robust passive armor. The composition of the armor is not known—but it is likely some form of laminated ceramic composite matrix. It’s also equipped with slat armor to protect certain areas that would otherwise be vulnerable to rocket propelled grenades.

However, the best way to survive on the battlefield to not to be seen in the first place, as such, the Russians have taken steps to reduce the tanks radar and infrared signature so that it is more difficult to detect and track. Indeed, the Armata’s combination of APS, reactive and passive armor—together with its unmanned turret—could render the vehicles nearly impervious to anti-tank missiles. And indeed, one expert on Russian hardware recently told me that even current generation sabot rounds might not be effective against the T-14. However, until there is more information available about that Armata—it’s hard to say for certain.