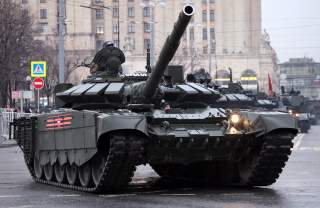 Russia has unveiled a devious new battlefield tactic: use tanks as decoys in order to hunt down enemy artillery batteries.

It's a bait-and-switch con job that relies on relies on Russian tanks, drones, artillery—and an opponent that is just a tad gullible.

So how to lure them out? Russia intends to do it by having its tanks pretend to be artillery pieces. Normally, tanks use direct fire, in which they have a line of sight to the target. But on occasion, they have been used as artillery. During the Korean War—because the terrain was too rocky for armor to maneuver—the United States inclined tanks on ramps and had them fire indirectly with high, arcing shots that passed over hills and hit targets on the other side.

Presumably Russia will do something similar—but only as a ruse. The idea is that the enemy will think the Russian tanks are vulnerable artillery pieces and reply with counterbattery fire.

By the time enemy artillery fires, the tanks will be gone from the target zone and drones will be overhead. "Immediately after firing, the tanks leave their position in order to avoid enemy fire," explained Sputnik News. "As soon as the enemy fires in retaliation, Orlan drones pinpoint the enemy's location and transmit it to the tanks and allied artillery. The allied artillery opens fire immediately and the tanks, which posed as artillery earlier, appear out of nowhere to finish what remains of the enemy positions."

The technique was used during recent exercises near the Russian city of Voronezh. The tank/drone/artillery combo recently struck targets as far as eight miles away.

Significantly, Sputnik News also noted that "the interaction between various forces is streamlined and is conducted by bypassing the headquarters, which makes reaction time faster." That may raise a few eyebrows given that the Russian and Soviet military have a reputation for centralized control compared to Western armies. But the new tank/artillery technique is further evidence that the Russian military is continuing to move toward the decentralized, fast-paced style required for twenty-first-century warfare.

But will the trick work? The tactic presupposes that the enemy will not be able to distinguish between tanks and artillery: however, a sophisticated adversary like the United States, which has numerous drones and sensors of its own, might spot the difference. Russian tanks will have to ensure that they are detected, but leave themselves enough time to vacate the area before a smart bomb lands on them. Russian tanks would not need to fire as accurately as regular artillery, but they might have to carry special ammunition for indirect fire.

The U.S. Army did not respond to TNI's queries about Russian tactics or possible American responses by press time. But Christopher Wilbeck, a recently retired U.S. Army armor colonel, thinks the Russian approach is interesting:

They are using tanks to engage targets in Non Line of Sight engagements as part of the overall maneuver plan. I doubt they are doing precision NLOS engagements—which would be a big deal. But, it sounds like they’re linking sensor to shooter—UAVs to tanks—and then using the mobility of the tanks to displace. And only them are they using traditional cannon fire artillery in the counter-counterbattery fires, again linking sensors and shooters—UAV to artillery and to tanks—all the while maneuvering on the objective with the tanks that fired the first rounds.

Wilbeck seemed surprised that the Russians were willing to embrace such a flexible option:

[The tactic] is very easy to describe but it would also be very difficult to execute, and pushing the execution down to the lower levels would be a big leap, especially for a traditionally centralized military. Bottom line is that they are describing combined arms maneuver using mission command [a flexible goal-oriented system]. Deliberately using tanks in the indirect fire mode to facilitate maneuver, and fire and movement is new. I think previous historical examples of tanks in the indirect fire mode were due to exigencies or limitations on the use of armor.

How well could the U.S. military perform this? Wilbeck says the while the U.S. Army is theoretically capable of doing this, he hasn't seen it done in a long time. "I haven’t seen indirect fire firing tables since I was on an M-60 tank. Not to mention the tank rounds needed to do it – HEAT and APFSDS are not indirect fire rounds."