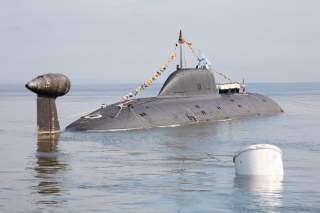 According to the report, top Reliance executives were in Moscow last week to meet with Russian defense officials about finding a partner for a joint venture between a Russian defense company and Pipavav Defence & Offshore Engineering, India’s largest defense shipyard, which Reliance has an 18 percent stake in. Specifically, Reliance is looking for a Russian partner with the “requisite technology expertise for manufacturing warships in India.”

As the Economic Times points out, the meetings come on the heels of India’s Cabinet Committee on Security (CCS) approving a plan for an Indian company to locally manufacture six nuclear submarines and seven stealth warships. The initial investment outlay for the project was set at Rs 1 trillion ($15.67 billion.)

Although the Russian government refused to specifically confirm the report, it did sound receptive to such a possibility.

"The Russian side is open to negotiations with Indian partners on various projects, including cooperation and JV [joint ventures] to manufacture modern defense equipment," a Russian official at the embassy in Delhi told ET in response to a query.

For its part, a Reliance official told the Indian newspaper, “We are deeply committed to investments in the defence sector and the PM's Make In India program,” referring to Indian Prime Minister Modi.

Besides the Make in India program, the prospective joint venture would likely take advantage of the amendments Modi approved in the Foreign Direct Investment (FDI) laws last year. FDI is now allowed to make up 49 percent of defense sector projects, up from 26 percent before Modi approved the changes.

Near the end of the Cold War, India also briefly leased a nuclear-powered submarine from the Soviet Union. More recently, in 2011 India began operating an Akula II nuclear attack submarine under a ten-year lease from Russia. That lease was valued at $970 million.

“If India decides to have more contracts to lease nuclear submarines, we are ready to supply,” Putin said at the time.

Later, Indian news outlets reported that negotiations are underway for a second Akula II SSN, which would enter into service with the Indian Navy in 2018.

Besides the nuclear submarines, India is also looking for foreign partners to help it build at least six stealth diesel-electric submarines. Competition for that contract is stiff.

As The National Interest noted back in January, Japan has expressed interest in helping India build Air-Independent Propulsion-equipped submarines. Just this week, the German Defense Minister was in Delhi lobbying for a German company to get the contract.

Other countries reportedly in the mix for that contract include France, Sweden Spain and, of course, Russia.