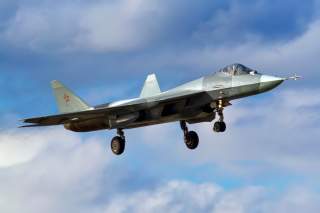 Russia’s Sukhoi T-50 PAK-FA fifth-generation stealth fighter may enter service in 2018, but the Kremlin is not in a particular hurry to buy the expensive new jet in large numbers. Meanwhile, Russia is continuing to develop new engines for the T-50, which is currently powered by interim Saturn AL-41F1 afterburning turbofans.

"We are not in a hurry," Russian deputy defense minister Yuri Borisov told the TASS News agency. "Most likely, this will be already the next state armament program, i.e. 2018-2025."

Because the Kremlin does not see procurement of the PAK-FA as an urgent matter, the Russian military is taking the time to ensure the aircraft is tested and works properly before embarking on massive acquisitions program. "We are holding an operational evaluation and have purchased limited batches,” Borisov said. “We’ll see how they will operate in practice. We are now revealing all drawbacks and making changes to ensure that we purchase practically proven examples when time comes."

In the meantime, the Russians are continuing to develop the next-generation Saturn izdeliye 30—sometime referred to as the izdeliye 129—engines for the T-50. There are few details available about the izdeliye 30 engines, but the new powerplant is expected to deliver 24,054lbs dry thrust and 39,566lbs of afterburning thrust. The new engine is expected to make its first flight installed onboard the PAK-FA in the fourth quarter of 2017.

"The first flight of the aircraft with the new engine is expected in the fourth quarter of 2017," a United Engine Corporation spokesman told TASS.

With the new engine installed, the PAK-FA should be able to offer kinematic performance comparable to the Lockheed Martin F-22 Raptor—cruising without afterburner at speeds exceeding Mach 1.5 with a maximum speed greater than Mach 2.0 at altitudes of around 60,000ft. “Performance-wise it certainly looks to compete with the Raptor,” one senior military official with extensive experience on U.S. fifth-generation fighters told me some time ago.

But while the Russians have developed active electronically scanned array(AESA) radars, infrared sensors and excellent electronic warfare systems, one of the big questions that remain is how well the Russians have integrated the jets’ avionics. It took the United States decades of effort and billions of dollars to develop the complex integrated avionics suite and sophisticated pilot vehicle interfaces that make the Raptor the fearsome weapon that it is.