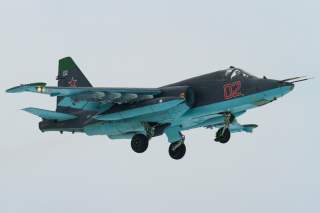 While top-of-the-line Sukhoi Su-30SM Flanker-H fighters and Su-34 Fullback bombers have captured the lion’s share of attention, the single most effective Russian aircraft deployed to Syria is the venerable Su-25 Frogfoot. The Russian air force has deployed a dozen of the slow, low-altitude flying tanks to its base in Latakia. But it’s not clear which version of the jet Russia has sent to Syria, however it’s probable that these are the latest Su-25SM version of the aircraft.

“The Russian air force will use the Frogfoots to support the Assad regime in the same way the USAF is using the A-10 Warthog to support the Iraqi government,” one veteran U.S. Air Force aviator told me. Another senior Air Force official agreed. “Frogfoots are the best air-to-ground platform for this type of fight for sure.”

The much-vaunted Su-34 Fullback bomber is not likely to play a significant role—four aircraft are just not enough. “Four jets are not enough to fly ‘sustained sorties,’ certainly not twenty-four hour ATO [Air Tasking Order] ops,” a third Air Force official said. “I'd guess that they are flying two-ship missions, hitting targets two to three times per day or night, tops. But... It's the Russians, so you never really know. “

The Su-30SM multirole fighter is not likely to play a significant role either—given their limited numbers and lack of a genuine mission. “The Su-30s are really an air-to-air platform so I could see them in an escort role,” the second Air Force official said.  “But, why would you need to escort your own fighters in a permissive environment?  ISIS doesn’t have any fighters of note… But the coalition does…”

That means most of the genuine combat operations will fall to the dozen Sukhoi Su-24 Fencer bombers and Su-25s. While the Su-24 is a good long-range battlefield interdiction aircraft, it is not particularly well suited for working closely with ground troops at “danger close” distances. However, the Su-25—like its American A-10 Warthog counterpart—was purpose-built as a close air support aircraft in the tradition of the Soviet Union’s much-venerated Ilyushin Il-2 Sturmovik from the Second World War.

Much like the Warthog—which the U.S. Air Force leadership is fighting tooth and nail to scrap—and the Sturmovik, the Frogfoot is an armored beast of an aircraft with an armored cockpit and multiple redundant systems. The Russian air force has upgraded dozens of Su-25s to the latest SM standard, which includes a glass cockpit, a GLONASS satellite navigation system and modern avionics that would allow for the use of precision-guided munitions. Eventually, the Russian air force will likely upgrade its entire Su-25 fleet since the Frogfoot still plays an important role in the service’s order of battle—as demonstrated by the Syrian deployment. Close air support has always been an important part of Russian and Soviet doctrine going back to the Second World War.

The aircraft has repeatedly proven itself supporting Russian ground forces fighting wars ranging from Afghanistan to the Georgian conflict in 2008. Nonetheless, because of the high-risk low-altitude missions Su-25 pilots fly, the Russians and other Frogfoot operators have lost many aircraft to ground fire—both to anti-aircraft artillery and surface-to-air missiles. ISIS does not have sophisticated air defenses, but it does have anti-aircraft artillery and it is likely that Russian aircrews will have to closely coordinate with Syrian regime ground forces while flying at low altitude. The presence of Syrian ground forces to identify targets should make Russian air strikes more effective—assuming Assad’s forces and the Russians can properly coordinate.

It would be a “safe bet” to assume that the Su-25 will bear the brunt of Russian combat sorties, according to one senior U.S. Navy aviator—especially given that twelve aircraft can maintain a decent sortie generation rate. U.S. forces are not likely to encounter the Frogfoot outside of Syria however. “I doubt the Russians will be flying their Frogfoots very far east,” a veteran Air Force pilot said.  “They'll likely be used only within 150 nautical miles of home station.”