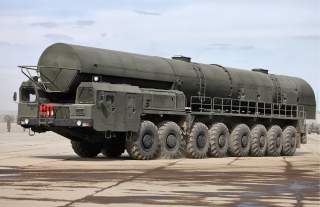 Russia’s strategic missile forces have conducted a successful training launch of a RS-24 Yars road-mobile intercontinental ballistic missile. The test was designed to verify the reliability of the weapon.

“A test launch of a Yoshkar-Ola missile division RS-24 Yars solid-fuel intercontinental ballistic missile, equipped with a detachable warhead, arrived at the designated area on the Kura test range on the Kamchatka Peninsula at the state-owned Plesetsk Test Space Cosmodrome,” the Russian Defense Ministry told the TASS news agency.

"All the tasks were fulfilled in full.”

Russian nuclear forces expert Pavel Podvig suggests that unlike other similar missile launch tests, this particular drill was conducted in conjunction with the Kremlin’s Zapad-2017 (or West-2017) wargames in Belarus.

“Russia has been conducting an annual large-scale exercise of its strategic forces in October, but this one appears to be linked to the large Zapad-2017 exercise that was completed today,” Podvig wrote in his Russian Strategic Nuclear Forces blog.

“It is worth noting that before the launch the missile crews practiced ‘relocation of the missile launcher to a remote launch area.’"

Podvig noted that this was the first test of a mobile Yars ICBM variant since December 2014. However, the Russians also tested a silo-based version of the Yars on September 12 earlier this month. That earlier test was notable because the Russians stated that the missile was fitted with “experimental” warheads.

“The main purpose of the launch was to reaffirm the reliability of a batch of the same class missiles,” the Russian Defense Ministry told the TASS news agency.

“The experimental warheads reached the designated area at the Kura proving ground in the Kamchatka Peninsula. The targets were met and tasks accomplished in full."

It is not clear what these new “experimental” Russian reentry vehicles (RV) are.

“We don't know what they are. One thing is certain - these are not ‘hypersonic deeply maneuverable vehicles,’” Podvig wrote.

“On the other hand, if these were just ‘conventional’ RVs of a new type, their experimental nature wouldn't have been mentioned. So, it is a puzzle for now. Of course, the defense industry has many things in its sleeve - a MaRV, for example (this one was developed by the Makeev Design Bureau, so I doubt it would be tested on Yars).”

(Recommended: What a War in the South China Sea Would Look Like)

It is not surprising that Russia is experimenting with new types of RVs. The Kremlin considers its strategic nuclear deterrent as the paramount guarantor of its sovereignty. With the United States working on advances missiles defenses, Moscow has stepped up its efforts to counter any perceived threat to its strategic nuclear forces—the one areas where Russia maintains parity with Washington.