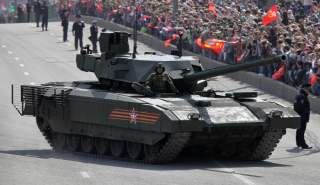 As Inside Defense reported earlier this month, current events have the U.S. Army questioning its organization, wondering if it’s otherwise destined to be perennially late to the game.

The Russian Army, after all, has gotten rather good at showing up unannounced on short notice. It would be bad enough, as Sydney Freedberg wrote for our Art of Future Warfare project, to find “Tallinn Burning” with the Chinese simultaneously causing trouble. That’s because the really ugly anti-access problem, a former Pentagon official assured us the other day, would be getting back into Tallinn or Riga or Vilnius after a Russian invasion. So, as we should want to avoid needing to eject dug-in Russian troops from NATO territory, what more could be done? Rushing more troops forward faster may not be as useful as devising labor-saving means of seriously slowing the enemy’s advance. And the technical advances required to do that are entirely the sort of thing we should expect from the Pentagon’s Third Offset initiative.

The good news for this effort is that the Russian Army today is a small fraction of the size of the Red Army of the Cold War. Russia is also almost bereft of allies, as Belarus and that collection of frozen-conflict oblasts don’t really add much. Thus, NATO’s ground forces actually outnumber the Russians several times over. What NATO would seem to need is not more troops, but more troops forward, or that can get forward in a hurry. To be fair, the Balts themselves are increasing military spending, though slowly, as raising regiments takes time. The rest of NATO has been rotating small units in and out of the three republics. Last year’s ‘Dragoon Ride’ sent a squadron of 60 Stryker vehicles and 400 troops from the 2nd US Cavalry through Estonia, Lithuania and Poland, and some of those Strykers will soon be upgraded with 30 mm guns and Javelin missile launchers. Even more usefully, the U.S. Army is planning to send an armored brigade to eastern Europe—. But that won’t happen until February 2017, and even then, single brigades moving up from hundreds of miles back may not matter.

This is because shipping tanks by ship is not going to save NATO’s eastern frontier on a Baltic timescale. The Polish government would be delighted, of course, to relocate U.S. III Corps from Texas to positions east of Warsaw. But barring that development, could the force just fly in? The U.S. Army maintains a lot of paratroopers, but they rarely drop into combat. When troops have jumped against strong opponents, things have historically gone badly—think Crete, Normandy, Market Garden, etc. Russians do like to bring armor and artillery to their battles, so we might want a more robust answer. The U.S. Army’s September 2015 “Combat Vehicle Modernization Strategy” does call for the near-term purchase of some “Mobile Protected Firepower” vehicles—light, air-droppable tanks for the infantry brigades. The vehicles would feature enough armor to resist small arms, and an active or reactive protection system to defend against missiles and rockets. The Army has been talking about an off-the-self purchase for its immediate need, but it’s not obvious which air-portable vehicle it might choose. We’ve also been hearing about this initiative since 2013, so it’s not clear that the service will follow through.

The further problem is that anti-access thing. The Russian Navy might not survive long in the Baltic Lake, but the Russian Air Force and Naval Aviation could challenge any aircraft flying in, with both fighters and surface-to-air missiles. Even if the airfields around Kaliningrad (Königsberg) find themselves under constant artillery fire, Russian strategic depth is legendary. In such a scenario, NATO’s air forces shouldn’t expect to find serviceable airfields in the Balts, if just from a steady stream of Iskander missiles. Could the troops fly in low and fast, crossing the sea by rotorcraft? Perhaps the Army could find a place in Poland to garrison the force and bed down its aircraft. Perhaps the troops could stage from existing bases in Germany, so as not to offend Russian sensibilities. Perhaps the Army could even find a rotorcraft developer who can improve on the cargo capacity of the venerable H-47 Chinook, or the range and speed of the V-22 Osprey. After all, the first of the Army's Big Eight initiatives for R&D is vertical lift. But regardless of how much effort is expended, they’re still not likely to figure out how to move tanks effectively by air.

So what else? Is there an inexpensive way to slow a Russian invasion, so that Russian tanks can't just charge down the highways towards the cities and the coast? Could some approach account for the limited manpower in the Balts? That sounds immediately robotic, but start with the obvious stuff. At least Estonia and Latvia might consider planting dense belts of anti-tank mines along their borders with Russia. Some old-fashioned flame fougasse would make an impression too. Newer systems like the M7 multi-shot ‘Spider’ smart-mine could also be useful: each fires up to six grenades against advancing infantry, killing or at least hampering engineers as they try to clear lanes. The M7 is also a command-detonated weapon, so it meets not just Pentagon policy, but the more restrictive Ottawa Treaty to which all three Balts are party. Stepping on it does nothing, unless the remote triggerman decides to whack you.

Could this be taken much further? Of course. A massive unattended network of sensors might distribute monitoring and triggering to any of many, mobile command posts, so that no single strike could take down the defensive web. Think also of what could be accomplished with a landward version of the mobile naval mine. The latter is that variety of bottom-dwelling torpedo that waits for a ship with the wrong acoustic signature to wander above. A ground-based version might look like a automatic floor cleaner with an explosively-formed penetrator in the middle. Such a ‘Boomba’ could roll onto roads after the lead vehicles pass, targeting just the one—the fuel truck?—figured to cause the most damage.

Just make sure to lay wires, and not rely on radio commands. The Russian Army is very accomplished at electronic jamming, though cutting all those wires would at least be yet another task for advancing sappers. But something must be done to reduce the vulnerability of the Atlantic community's most exposed outpost. That whole Second Offset—what we used to call the precision revolution—was about offsetting local numerical superiorities. Too many anti-aircraft guns around the bridge? Send a single laser-guided bomb from miles away. Too many Russian tanks in the Fulda Gap? Drop planeloads of Sensor-Fuzed Weapons. When faced with the most challenging military problems at the edge of conventional influence, the Third Offset can mean the same today.