Russia's Lethal Nuclear Arsenal Gets an Upgrade: Should NATO Worry? 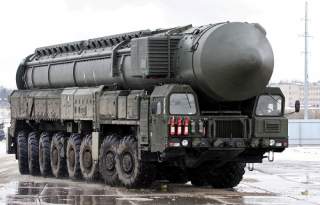 Last week, Russian President Vladimir Putin gave brief remarks at the opening ceremony of ARMY-2015, an exposition where Russia’s defense contractors demonstrated new military technology for foreign weapons buyers. The speech was relatively sedate. It omitted much of the aggressive rhetoric that has become commonplace for the Kremlin, amounting to little more than a sales pitch for Russia’s military systems. Highlighting several pieces of Russia’s plan to modernize its military, Putin mentioned that, “This year we will supply more than forty new intercontinental ballistic missiles [ICBMs] to our nuclear force.”

This simple statement ignited a minor fervor in NATO countries. Secretary of State John Kerry told reporters that, “Nobody should hear that kind of announcement… and not be concerned.” NATO Secretary General Jens Stoltenberg said, “This nuclear sabre-rattling of Russia is unjustified…. It’s also one of the reasons we are now increasing the readiness and preparedness of our forces.” Reuters says Russia is “beefing up” its arsenal, CNBC asked whether it meant a new cold war, and many others worried about the prospect of a new arms race.

Reading through these statements, you would think that Russia had announced a new arms buildup that posed a significant threat to the West. In fact, Putin’s announcement was entirely in line with previous expectations and did not add major new capabilities to his nuclear arsenal. Russia continues to comply fully with the New START treaty, which limits strategic launchers like ICBMs. Because their Soviet-era ICBMs are aging out of service, Russian nuclear forces must take delivery of forty new ICBMs each year just to replicate their existing capability. Far from a threat, Russia’s ICBM modernization may actually make their arsenal more vulnerable. In short, the speech was barely an announcement and, because it held a moderate line on nuclear modernization, probably more good news than bad.

Let’s take a closer look. Under New START, Russia must decline to reach an aggregate limit of 700 deployed launchers (meaning ICBMs, SLBMs, and heavy bombers) by 2018. Both Russia and the United States are on track to meet these commitments. In fact, according to the latest data, Russia is far below this limit, holding its aggregate number of launchers steady at 515. The forty “new” ICBMs do not increase the number of ICBMs deployed, but simply replace old missiles that have been in service since the 1970s.

It is entirely reasonable for Russia to replace its Soviet-era SS-18, SS-19, and SS-25 missiles with variants of the new SS-27 and the Sarmat heavy ICBM. The replacement process, which Russia hopes to complete by 2022, decreases the number of missiles in total, but packs more warheads onto each missile, a vulnerability that the United States would never accept in its own arsenal because it means that more Russian warheads can be attacked by fewer U.S. warheads.

Russian ICBM modernization is reasonably well understood and proceeding as expected, which is why veteran nuclear watcher Hans Kristensen noted last month that that Russia was expected to deploy forty ICBMs per year on average. If anything, last week’s announcement represented a step back from Putin’s pledge last year to deploy fifty new ICBMs this year, a clear concession to the acute fiscal pressures that are hemming in Russia’s military modernization. Furthermore, the United States should welcome any Russian effort to be transparent about its nuclear arsenal. The information transmitted through New START inspections and in public announcements like these is reassuring to both parties. It should be applauded rather than criticized, especially if they do not announce new capabilities.

Even if Russia were somehow to accelerate its nuclear modernization efforts, the U.S. Department of Defense recognizes that Russia “would not be able to achieve a militarily significant advantage by any plausible expansion of its strategic nuclear forces, even in a cheating or breakout scenario under the New START Treaty.”

To summarize: Russia could deploy many more missiles and still remain behind the United States in numbers of launchers and under the New START caps. Even if it cheated on the New START treaty and deployed still more, the Pentagon does not believe that this would significantly affect the strategic balance.

Last week’s announcement should fall somewhere between mundane and reassuring. Instead, much of the West took the bait. Putin clearly hopes that his irresponsible talk about nuclear weapons will strike NATO like a drum, sending fear and awe resonating through the alliance. He hopes to provoke a reaction that will distract attention from his conventional and hybrid aggression, raise Russia’s stature in Eastern Europe, solidify his rule at home, and allow him to impose even greater military expenditures on his citizenry.

With the United States prepositioning heavy weaponry to its NATO allies in the Baltics and NATO itself planning to more than double the size of its NATO Response Force (NRF), Russian rhetoric will only grow more shrill, reckless, and urgent in the coming year. And with the U.S. presidential election kicking off, Putin is likely to find an audience that is ready and willing to amplify his alarmist rhetoric.

To be sure, Russia has made deeply dangerous moves with its nuclear arsenal. Itsabrogation of the INF treaty and apparent lack of interest in returning to compliance undercuts U.S. confidence that it is possible to reach negotiated solutions with Russia. Furthermore, Kremlin officials have also proven anxious to inject nuclear threats into non-nuclear crises, as when Putin rather strangely claimed to have prepared to raise the alert level for his nuclear forces to cover his aggression in Ukraine.

As former Secretary of Defense William Perry told a meeting in Vienna this week, “We are about to begin a new round in the nuclear arms race unless some brake is put on it right now.” With rhetoric reaching a fever pitch, it is important to remember that the goal is not to plunge eagerly into a new arms race, but to prevent one.

The episode of the forty ICBMs firmly underscores the need to be clear about Russia’s actions, to demarcate the trivia from the substantive, the rhetoric from the threat. The United States has no interest at all in indulging Putin’s effort to create tension at the nuclear level and every interest in confronting to Russia’s aggression at the conventional level. To date, the White House has been exemplary in drawing this line, responding patiently but firmly to INF noncompliance while refusing to rise to Putin’s nuclear threats. In response to a question about the forty ICBMs, White House press secretary Josh Earnest told reporters, “We’ve seen these reports. I don’t have a specific reaction to them.”

At the same time, the White House has moved assertively to strengthen NATO’s ability to respond to aggression on its own terms, pledging to contribute high-end assets to the NRF’s spearhead force. This Very High Readiness Joint Task Force (VJTF) will benefit from U.S. special operations forces, logistical, artillery, and intelligence, surveillance, and reconnaissance (ISR) capabilities.

There are already calls in the United States to fight fire with fire and add to our own nuclear forces. However, there is little reason to believe that building new nuclear capabilities or forward-deploying the ones we already have would restrain Russia. There isevery reason to believe that Putin would take these steps as license to divert attention to the nuclear balance, to abrogate existing arms control treaties, to launch a new arms race, and to use his nuclear arsenal to cover aggression at lower levels—in short, to start a new Cold War.

It is better to fight fire with cold water. The United States should firmly resist Russian aggression by deploying conventional forces in Europe and just as firmly resist the urge to respond to nuclear provocations. It will certainly not help to worry about “new” nuclear threats where there are none. The best way to prevent a new arms race is to refuse to engage in one.

Adam Mount is a Stanton Nuclear Security Fellow at the Council on Foreign Relations (where this piece first appeared) where he is writing a profile of nuclear disarmament in the United States. He holds a PhD in Government from Georgetown University.