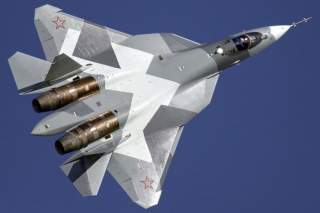 Russia’s new fifth-generation fighter jet will be superior to its American counterparts in every way, a senior Russian military official has said.

Speaking of the PAK FA to reporters last week, Bondarev said that “It will be in no way worse than similar American planes such as F-22 and F-35. Rather, it will outperform them in almost all parameters.”

He went on to explain that "the features given to it by its designers allow it to outperform all similar planes that already exist or will soon appear abroad."

This includes its ability to fly at speeds surpassing Mach 2, however, Bondarev emphasized that other features will ultimately be more important. “What counts most is its invisibility to radar, weapons and maneuverability,” he said.

On these features, the commander commented that the PAK FA “is demonstrating excellent performance. It has an excellent system of weapons against both land and air [targets]. The plane is practically invisible to radar.” He also said that the plane will be able to hit sea targets, according to TASS.

(Recommended: Russia's New Armata Tank- The Best in the World?)

Furthermore, Bondarev also said that the plane will be equipped with new technologies as they become available. “The plane is fitted out with the latest technologies available today. Besides, if there are new developments, they are also being introduced," he said.

Bondarev also told reporters that the PAK FA is currently undergoing all of its trials, and the first of the PAK FA’s will become operational with the Russian Air Force sometime next year. By 2017, the plane will be in serial supplies. “We’re completing the aircraft tests and from 2017 they will be serially supplied," the Russian Air Force chief was quoted by Russian news outlets as saying.

On this note, Bondarev said that the air force is eager to purchase as many of the PAK FAs as Russian arms manufacturers can produce. "We shall have as many planes of this type as the industry’s capabilities will allow for," he said, adding, “Of course, they will be unable to provide 24 planes at once, but we will take as many as they offer. If they make four, we will have four, if they make ten, we will take ten.”

This seems to contradict earlier statements made by Russian Deputy Defense Minister Yuri Borisov. Back in March, Borisov said that the “new economic situation” might force Moscow to reduce its initial purchase of the PAK FAs.

“It would be better for us to have a reserve of PAK-FA and the possibility to move ahead in the future to using the 4+ fighters’ [Su-30 and Su-35] capabilities to the maximum," TASS quoted Borisov as saying at the time. The same report said that the Russian Air Force still expected to purchase around 55 aircraft by 2020.

According to Russian state media outlets, the PAK FA, which is also called the T-50, is “a stealthy, single-seat, twin-engine jet fighter, and will be the first operational aircraft in Russian service to use stealth technology. It is a multirole combat aircraft designed for the air superiority and ground attack functions.”

U.S. military and intelligence officials have also expressed alarm at the capabilities of Russia’s fifth-generation fighter. For example, last year former U.S. Air Force intelligence chief Lt. Gen. Dave Deptula told The National Interest that “the analysis that I have seen on the PAK-FA indicates a pretty sophisticated design that is at least equal to, and some have said even superior to U.S. fifth-generation aircraft.”

He added: “It certainly has greater agility with its combination of thrust vectoring, all moving tail surfaces, and excellent aerodynamic design, than does the F-35.”