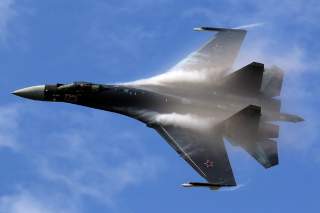 Russia has apparently started work on “implementing” a contract with Indonesia to supply it with advanced Sukhoi Su-35 Flanker-E air superiority fighters. However, no details are available as to exactly when the new fighters would be delivered.

“The contract has been signed and we are starting to implement it," Vladimir Kozhin, a Russian presidential aide for military and technical cooperation, told the Rossiya-24 channel according to TASS.

Russia has been negotiating the deal with Indonesia for the past two years—despite considerable opposition from the United States.

Nonetheless, the deal appears to have gone through.

“We are grateful to the military and political leadership of Indonesia for their firm position, which they have not been afraid to state openly, including to American partners,” Kozhin said.

Indonesia is likely keeping its options open—making sure not to become too dependent on any one supplier. Jakarta already operates older versions of the Flanker series including the Sukhoi Su-27 and the Su-30 variants, but Indonesia also operated American-build Lockheed Martin F-16 Fighting Falcons and Northrop F-5s.

“Indonesia is definitely keeping its options open as its eyes China's rise and as it sees the Russians becoming more active in international conflicts and engagements,” Sam Bendett, a researcher specializing in the Russian military at the Center for Naval Analyses told The National Interest.

Moreover, many of Indonesia’s neighbors similarly hedge their bets on Western and Russian equipment. “Indonesia's neighbors like Malaysia have long diversified their weapons imports to include Russian-made hardware,” Bendett said. “For example, Malaysia even adopted Russian planes to use American bombs.”

For Russia, which has been eager to sell its hardware after successfully showcasing its weapons over Syria, a deal with Indonesia could be an important opening. “This deal may be a an opening for more sales to the archipelago - such as continued sales of Russian Mil helicopters and other equipment needed to ensure the security of that nation,” Bendett said.

However, there are also geo-political factors in play. Russia, which is eager to show that it is once again a great power, wants to be able to retain its influence in the region—which has been on the wane since the 1991 collapse of the Soviet Union. “Russia is eager to retain what it sees as an important client in a key region of the world,” Bendett said.