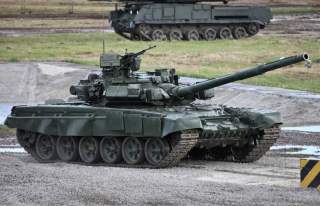 According to sources familiar with the incident, the tank in question was an older Syrian-operated original model T-90 while the missile appears to have been an older TOW-2A wire-guided heavy anti-tank missile. The Syrian crew survived the attack with the T-90 suffering only minor damage and the vehicle remaining combat capable thanks to its Kontakt-5 explosive reactive armor. Indeed, according to Russia’s Research Institute of Steel—which developed the Kontakt-5 ERA package—the T-90 was recovered and driven under its own power to a Syrian tank maintenance facility for repairs. Other Russian sources indicated that one of the reasons the TOW hit the tank in the first place was because the poorly trained Syrian crew refused to close the T-90’s hatch—which deactivated the tank’s Shtora electro-optical jamming suite.

Nonetheless, it is an open question as to how well a more modern version of the tank—like the Russian Ground Forces’ T-90AM would fair against a more current version of the TOW—like the wireless TOW 2B. The TOW 2B Aero RF has a 4,500m range and is fitted with dual Explosively Formed Penetrator (EFP) warheads configured for top attack. There are also foreign weapons like the Israeli Spike—which have even longer ranges and are possibly fitted with more capable warheads. Moreover, how would the T-90A fair against newer, man-portable fire-and-forget anti-tank missiles like the Javelin, which are becoming increasingly common?

While defeating a Syrian crew with minimal training and obsolete equipment is one thing, it’s another matter defeating a well-trained and competent Russian tank crew with the latest hardware. It would be exceedingly unlikely for a professional Russian crew to make rookie mistakes such as leaving the hatch open during a battle knowing full well that it would disable the active protection system.

Moreover, the current Russian versions of the T-90 are no longer equipped with the Kontakt-5—instead they are equipped with the Relikt ERA package. The manufacturer claims that the contact Kontakt-5 system reduces the effectiveness of tandem-charge anti-tank warheads by sixty percent, reduces the effectiveness of RPGs by ninety percent and reduces the effective of kinetic energy penetrators by twenty percent. The Russians claim the Relikt is twice as effective as the Kontakt-5 and offers the equivalent of more than 1000mm of rolled homogenized armor (RHA) against tandem charge warheads. Or the equivalent of more than 800mm RHA protection versus 120mm sabots rounds like the U.S. Army’s M829A3. Meanwhile, the new T-14 Armata features an even more advanced dual-layer reactive armor package called Malachit.

While Russian arms manufacturer—like their Western counterparts—make optimistic claims about the effectiveness of their wares, until those systems are tested in battle, it’s hard to say if those assertions are valid. Until a completely crewed T-90AM meets a competently trained force equipped with modern anti-tank missiles on real battlefield—it’s hard to say how effective these weapons really are. Hopefully, we’ll never get to find out.