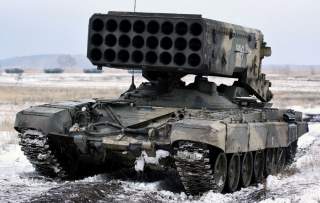 Russia is reportedly deploying the TOS-1 Buratino multiple launch rocket system (MLRS) to Syria as part of its expanded presence in that country. It is unclear how many of the weapons have been sent to Syria, reports suggest a substantial number have been deployed. Indeed, there are videos of the Buratino purportedly in action in Syria’s Latakia province.

But while Russia has deployed other ground vehicles and artillery pieces to the war-torn country, the use of the Buratino in Syria is likely to draw a strong reaction from many quarters. Based on the chassis of the T-72 tank, the TOS-1 is no ordinary self-propelled artillery piece—it is primarily designed to launch massive thermobaric charges against infantry in confined spaces such as urban areas or mountainous regions. While there is no question of the effectiveness and devastating power of thermobaric or fuel-air explosives, such weapons are inherently imprecise and cause massive collateral damage if used in built up areas.

At its core, the TOS-1 Buratino is a T-72 tank with its turret removed in favor of a thirty-pack of 220mm rockets. The rockets come in two versions—one with a thermobaric charge and another that uses an incendiary device. Unlike traditional artillery, the Buratino is designed as a support weapon for infantry that are clearing out enemy troops in urban areas or forces that are dug-in in mountainous regions—similar in concept to World War II-era assault guns like the Soviet ISU-152 or Nazi Sturmtiger. As such, the rockets have a relatively short maximum range of about 5,000 meters and a minimum range of about 400m. The Buratino is not assigned to the regular Russian artillery troops, rather it is a weapon that is normally employed by specialized nuclear, biological and chemical warfare troops as part of a flamethrower battalion.

A Buratino can obliterate a roughly 200m by 400m area with a single salvo. In other words, it can instantly turn several city blocks into smoldering rubble with a single shot. That’s because unlike with conventional explosives that incorporate their own oxidizers, thermobaric explosive rely on the atmosphere to provide them with oxygen. Basically, the warhead releases a cloud of chemicals—such as tetranite—which mixes with the air before it explodes. The resultant explosion—which is usually much larger than an equivalent weight of conventional ordnance—creates a massive high temperature blast and a high-pressure shock wave. Those who are in the affected area—who are not immediately incinerated—die when the overpressure destroys their lungs.

Russian forces used the Buratino—which was developed during the Soviet Union’s war in Afghanistan—to devastating effect in breakaway republic of Chechnya in southern Russia during the 1990s. There, Russian forces effectively flattened the city of Grozny using weapons like the TOS-1 in urban combat—effectively advancing their infantry after the thermobaric rockets cleared out any would be resistance. More recently, the weapon has also shown up in Ukraine serving with Russian-backed rebel forces in the eastern parts of that country. At least seven Buratinos have been spotted in Ukraine according to that country’s defense ministry—one vehicle was allegedly destroyed in the fighting.

Russia’s reported deployment of the TOS-1 to Syria likely signals that Moscow’s ground forces will be playing a much more active role in the fighting in that country.