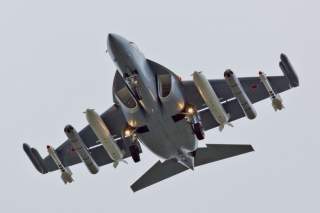 In the world of Russian jet fighters, Moscow’s finest — such as the Flanker and the fifth-generation Sukhoi T-50 — tend to grab the most headlines.

But the Yakovlev Yak-130, a comparatively non-glamorous twin-seat jet trainer, is quietly turning heads … because it’s obviously more than just a trainer. The twin-engine jet dubbed “Mitten” by Western intelligence is now showing its credentials as a genuine multi-role fighter.

When an air force wants to maximize its combat potential, a trainer — even a jet-powered one — might not be the most obvious choice of aircraft.

But today’s multi-role combat trainers are a viable and comparatively low-cost alternative to conventional fighters — even one that originates from behind the former Iron Curtain.

Like many post-Soviet military projects, it took a long time before any pilots got their hands on the Yak-130. But now the aircraft is showing up at the Russian air force’s advanced flight training schools.

Further, the Kremlin has begun deliveries to Belarus, a close military ally of Moscow. Previously, the Kremlin delivered Yak-130s to Algeria, another established customer of Russian-made warplanes.

The Yak-130 has three hard-points under each wing. That means it can carry up to three tons of air-to-air missiles, air-to-surface missiles, precision-guided bombs, free-fall bombs, rockets, gun pods and external fuel tanks.

Another two stations at the wingtips can carry air-to-air missiles or decoy launchers to spoof enemy heat-seeking missiles. That’s not at all. Under its belly, the plane can carry a hard-hitting 23-millimeter cannon.

Recent photographs reveal the next stage in the Yak-130’s maturation to a combat aircraft. In the photos, a Yak wearing the latest Russian military markings has a characteristic “bump” in front of the cockpit. This could house the LD-130 laser rangefinder and TV camera for identifying targets and improving the accuracy of its weapons.

Another option for a future upgrade is a flight refueling probe, which would expand the jet’s range for offensive missions.

A fully armed and fueled Yak-130 tips the scales at 22,700 pounds. That’s only a little more than half the weight of a fully-loaded F-16 Fighting Falcon, the primary multi-role fighter of the U.S. Air Force and many of its allies.

The subsonic Yak-130 belongs to a class of aircraft known as lead-in fighter trainers — or LIFTs. For a modern-day air force, LIFTs allow student pilots to familiarize themselves with the advanced technology they’ll encounter once strapped into a front-line fighter’s cockpit.

For its part, the U.S. Air Force is currently looking to buy 350 copies of a new LIFT to replace its hopelessly outdated T-38 Talon jet trainers. The Air Force calls the multi-billion-dollar program T-X.

But beyond the LIFT role, jet trainers such as the Yak-130 can fly genuine combat missions, too.

For smaller air forces — such as Belarus — the Yak-130 is a low-cost way of flying missions that would otherwise require an expensive multi-role fighter. After retiring its Su-27 fighters due to cost reasons and disposing of its Su-24 strike aircraft, Belarus badly needed to bolster its air combat fleet.

Small and agile, but able to pack a punch, the Yak-130 is also useful in counter-insurgency and asymmetric warfare.

Russian manufacturer Yakovlev — once the country’s preeminent fighter designer — designed the Yak-130. Irkut Corporation bought out Yakovlev in 2008, and shifted its production to Russia’s far east.

Work on a new trainer for the Russian air force — then the Soviet air force — began in 1990, and by the middle of that decade the Yak-130 competed against the much more conventional Mikoyan MiG-AT. A prototype Yak-130 began flight testing in April 1996, but it wasn’t until 2002 that the Kremlin finally selected the trainer instead of the MiG.

During the first decade of the new century, Russia produced four prototype Yak-130s.

The Russia air force placed its first order in 2005 for 12 aircraft, and began receiving the planes in early 2010. The following year, the air force signed a further order for 55 aircraft.

Manufacturers have since delivered all the jets, which are in service with training units at two airfields. Yakovlev is also delivering another dozen aircraft in a “stripped-down” configuration for an aerial demonstration team.

The next customer could be the Russian navy, which would use the Yak-130 to prepare pilots for its carrier air wing at a newly constructed shore-based training facility. The future of the Yak-130 in Russia looks bright — the defense ministry wants at least another 150 examples up to 2020.

The plane’s AI-222–25 turbofan engine comes from Russia — but is the result of a cooperative technology agreement with the Ukrainian company Progress. Ukraine banned military cooperation with the Kremlin after Russia invaded Crimea in February 2014.

It’s unclear if this will affect the engine’s production.

But Irkut has busily courted foreign customers. The first of these was Algeria. Advanced fighter sales between the two countries went through a turbulent period in the 2000s — because Moscow promised much newer fighters than it actually delivered. But the Yaks proved to be a far more successful purchase.

The first of 16 aircraft arrived in Algeria in late 2011. Like Algeria’s Sukhoi Su-30MKAs, the diminutive Yak-130s have customized Western cockpit instrumentation.

A bid to sell the trainer to Libya fell through after that country erupted into civil war, and another war killed a projected sale to Syria. However, as relations between Moscow and the West continued to deteriorate, the Kremlin stated that the Syrian transfer could resume.

Belarus bought four Yak-130s in late 2012, and deliveries began in April 2015. Irkut is hopeful that Bangladesh will be next to receive the “Mitten,” with deliveries of a planned 16 aircraft expected to commence next year.

Bangladesh has no shortage of jet trainers in its inventory, and the Yak-130 could fulfill a counter-insurgency role — or at least serve in a dual-role purpose.

Most of the other nations that have looked at the Yak-130 have counter-insurgency or other light combat requirements, on top of any training role. These countries include Armenia, Azerbaijan, Kazakhstan, Mongolia, Myanmar, Nicaragua, Uruguay and Vietnam.

The Yak-130 is a proven lead-in fighter-trainer with combat capability that can also serve in the kind of counter-insurgency war that the U.S. Air Force has found itself fighting in Afghanistan, Iraq and Syria.

There’s no way in Hell the U.S. will ever buy Yak-130s for its its T-X requirement. But the Air Force might just get the next best thing.

The Italian-made M-346 Master is a Yak-130 by another name. It looksvery similar to the Russian trainer thanks to a cooperation deal struck between Yakovlev and the Italian Aermacchi firm in the early 1990s.

Aermacchi scaled down the Yak-130 slightly, gave it a new digital fly-by-wire control system and an advanced digital cockpit. By the end of the decade, the Russian and Italian partners split, but the resulting M-346 owes a lot to the Yakovlev product.

Indeed, the Russian company received a a multi-million-dollar payout for blueprints it handed over to Aermacchi. Today, the M-346 is a contender for the U.S. Air Force’s new jet trainer.

It has an outside chance, at best — especially now that former U.S. partner General Dynamics has abandoned Aermacchi’s airframe. But the M-346 — offered to America as the T-100 — found customers in Singapore, Poland and Israel.

Which is an ironic twist. It’s not inconceivable that Russian and American pilots destined for the “fifth-generation” T-50 and F-35 will both learn how to fly in what is very nearly the same aircraft.