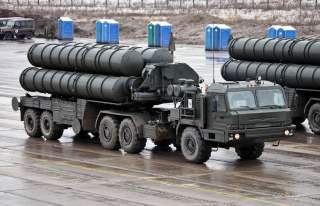 Russia has doubled the number of S-400 air defense system it deploys in its far east region as part of a larger military buildup in the region.

Reports in Russian state-media, citing the Russian Defense Ministry, say that Moscow has deployed yet another S-400 missile defense system to the Kamchatka Peninsula; according to the Russian defense ministry. The reports said that Russia ultimately intends to deploy five S-400 systems to protect Kamchatka’s skies.

The S-400 is one of the most advanced air defense systems in the world, and can be equipped with missiles with ranges between 120 km to 400 km (long-range). The system can shoot down anything from small aircraft to ballistic missiles carrying nuclear warheads.

The S-400 is already deployed around Moscow and St. Petersburg, and Severomorsk, which is where Russia’s Northern Fleet is based. According to Russia Today, Moscow has also deployed the S-400 system in its southern coasts near Japan.

While Russia is not at the moment poised to export the system, a deal for the future delivery of the system has already been struck with China. (Possession of such a system will certainly cause unease in Taiwan and Japan, especially.) Other countries wishing to acquire the system include Saudi Arabia and Turkey.

In addition to building up its missile defenses in the far east, Russia has been building up its naval Pacific Fleet. In the past two years, it has continued building new ships for this fleet. Among these ships are the Borei-class nuclear-powered ballistic-missile submarines (SSBN).

One of the Pacific Fleet’s main priorities is patrolling and maintaining control of the Northern Sea Route in the Arctic. The Pacific side of the Arctic is increasingly seen as a crucial bastion of Russian trade and energy, as China’s power rises.

Other countries, such as the United States, also wish to protect their interests in the Arctic. A building up of Russia’s Pacific Fleet could cause tension amongst the Arctic powers. And with the United States to head the Arctic Council until 2017, U.S.-Russian cooperation will be key to avoiding conflict.

In addition to Russia’s anti-missile and naval buildup, Russia conducted a snap military drill in 2013 in its far east, involving “160,000 servicemen, 1000 tanks, 130 planes and 70 ships.” The drill is to date one of the largest since the collapse of the Soviet Union, and caused some concern in China and Japan.

Russia has also drastically increased the number of air patrols it conducts in the region. Japan scrambled fighter jets to intercept Russian strategic nuclear bombers participating in the exercise. Last year, Japanese defense minister Itsunori Onodera said that Russian air patrols in the region were being conducted more frequently than during the Cold War.

Russia also conducted a massive military drill—Vostok-2014—in its far east in September 2014. During Vostok-2014, 100,000 servicemen, roughly 1,500 tanks, 120 aircraft, 5,000 pieces of weaponry, military and special hardware and about 70 ships participated in the exercises.

Rebecca M. Miller is an assistant editor and illustrator at The National Interest. She tweets at @RebecMil.