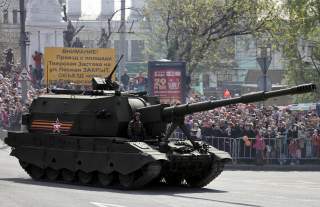 Russia’s new state armament program, which will run through 2025, will focus heavily on unmanned and autonomous systems. But while the Kremlin sees great potential in such autonomous systems, Russian industry is behind the West—particularly the United States and Israel in developing such weapons.

“Autonomous robotic equipment is another important and promising area,” Russian President Vladimir Putin said during a meeting of Russia’s Military-Industrial Commission on Jan. 26. “It has the potential to drastically change the entire armament system of general-purpose forces, and we need our own effective development projects in this sphere as well.”

Russia is still well behind the other great power in developing unmanned and autonomous systems, but given the Kremlin’s focus on the technology—the gap is starting to close.

“Russia is still behind the West, Israel and even China when it comes to the development and fielding of UAVs [unmanned aerial vehicles] especially,” Samuel Bendett, a Russian military affairs researcher at CNA Corporation told me. “The Russians' own estimate is that they are almost 10-15 years behind the leading unmanned state powers of today. That gap is starting to close, slowly...”

The Kremlin’s interest in unmanned technologies has spiked following Moscow’s interventions in Ukraine and Syria. Small unmanned systems have proven to be extremely useful to the Russian military during operations.

“It’s safe to assume that following Russia's involvement in Ukraine and Syria, there will be increased interest in and development of various unmanned platforms,” Bendett said. “There is a family of small Russian UAVs that has been a major force multiplier for Russian forces when it comes to ISR [intelligence, surveillance and reconnaissance].”

Russian industry is furthest along in developing unmanned aerial vehicles. “Russia's most developed autonomous systems are the UAVs—there are a lot of domestic developments taking place that will allow to start fielding armored drones in the near future,” Bendett said. “This effort received a lot of attention from the Russian MOD [Ministry of Defense], the industries supporting Russian military as well as the population.”

But the Kremlin is also investing in ground and sea-based unmanned and autonomous systems. “The Russians have also been investing in unmanned ground systems (UGV) and sea-based platforms,” Bendett said. “There are several UGV platforms undergoing testing and evaluation—one of them—‘Uran’—is working alongside Russian forces in Syria in demining roles.”

Thus, while Russia remains behind the curve in developing unmanned systems, the Kremlin—having seen the potential of these weapons—is investing in those technologies. The Russians have the engineering expertise; it’s just a question of time and money, but Moscow will eventually get there.