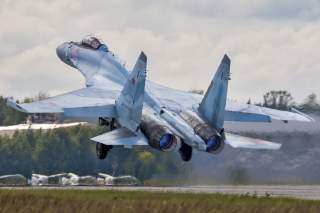 Russia this month announced another draw-down from its combat operations in Syria, which began on Sept. 30, 2015. The Russian military will retain troops in the country, likely indefinitely, where it has demonstrated the capabilities of new weapons and tactics — which together show it has learned from its shortcomings in past operations.

Nevertheless, as experts told War Is Boring, many of the Russian military’s old habits were also on display throughout this campaign.

It’s no secret that Russia used its military campaign to both demonstrate and test hardware, and furnish its forces with some actual combat experience. In March 2016, Russian Pres. Vladimir Putin said that combat operations in Syria are the best form of training for his country’s armed forces.

“The Russians quickly began to see Syria as a testing ground for various weapon systems that hadn’t been used in combat before as well as an opportunity to give various branches of the military experience in an actual war zone,” Michael Kofman, a specialist on the Russian military at the Wilson Center’s Kennan Institute, told War Is Boring.

This included Russia firing its ship and submarine-launched Kalibr cruise missiles into Syria, all the way from the Caspian and Mediterranean Sea, and long-range Russian Tu-95MS and Tu-160 strategic bombers — flying from Russia itself — striking targets with Kh-555 and new Kh-101 air-launched cruise missiles.

Russian combat aircraft in Syria averaged 40-50 sorties per day, with peaks as high as 100 such as which occurred in January 2016. Russia achieved this without deploying more than 30-50 combat aircraft and 16-40 helicopters to Syria throughout the campaign, which Kofman notes is a much smaller deployment than the Soviets had in Afghanistan. Mechanical failures and combat losses in the air been “magnitudes less than previous Russian or Soviet air operations,” Kofman added.

Russia only lost a small number of aircraft, largely due to the success of Russian technicians who kept both new Russian aircraft and Soviet-era aircraft based in Syria airborne — an exception being the recent loss of a single Su-24M2 to mechanical failure on Oct. 10. The most well-known loss of a Russian plane during the war was the 2015 shootdown of an Su-24M by a Turkish F-16.

This is illustrative of improved flexibility in the Russian military, which has demonstrated it can achieve more with fewer forces than past in past wars.

Neil Hauer, an expert on Russia-Syria relations who has followed the conflict closely, also pointed out some of the improvements the Russian military has demonstrated in Syria compared to past conflicts.

“I think there’s been an implicit focus on using fewer frontline units than in the Donbass conflict,” Hauer told War Is Boring. “While Russian army units were engaged in full frontline battles there, there’s been nothing of the sort in Syria. Instead, Russian forces have acted in support roles in the guise of advisers, light infantry (reconnaissance and artillery spotting), and air support. The only real combat roles to date have been played by Wagner [Group, private Russian] mercenaries.”

Hauer points out that Russia quickly adapted early on in Syria, re-scaling “their ambitions after realizing just how little offensive action pro-regime forces were capable of.”

“The first months of the Russian intervention saw broad attempts to advance on a number of fronts, but many of the results were disastrous — especially in north Hama, where the regime lost dozens of tanks in a few weeks for zero gain, despite heavy Russian strikes,” he noted. “Since then, Russia has largely focused on supporting one regime offensive at a time, while suppressing rebel and Islamic State forces elsewhere.”

Kofman pointed out that when Russia first intervened in Syria it worked to help the regime secure key roads, infrastructure and isolated Syrian bases – while destroying every piece of heavy military hardware they could find in opposition hands. Most of that hardware had been captured from the Syrian army.

While Russian initial airstrikes in late 2015 and early 2016 reportedly helped the Syrian regime recapture a mere two percent of its territory, air strikes were already having a decisive effect on the battlefield.

Kofman argues that the two percent figure proved misleading since control over territory in Syria has proven “elusive,” largely because local leaders sided with whoever seemed likely to win. Therefore, Russia helped “swing the balance in favour of Damascus” through its bombing campaign across Syria, along with its subsequent sponsorship of ceasefire arrangements between regime forces and the opposition.

Furthermore, the regime’s grip on most of the population centers in Syria and the depopulation of opposition-held areas explained how Russia went from helping Damascus regain a mere two percent of Syrian territory to “appearing the victor in the conflict in less than two years.”

More broadly Russia’s showcasing of hitherto unused hardware in Syria, particularly its long-range bombers and cruise missiles, demonstrated to NATO its long reach and potential to target the alliance’s military assets in Europe were war to break out between the two.

While these improvements are certainly significant, the Russian military has yet to shed nor improve upon some of its older habits from past conflicts.

Even though the Russian air campaign was certainly effective, it may have resulted in between 8,324 and 11,282 civilian deaths through February 2017, according to the conflict monitoring group Airwars.

Many of Russia’s bombs had far greater payloads than necessary for their targets, Kofman noted. This indicates that Russia still, more-or-less, fights the same way it did in the early 1990s. The proportion of precision-guided weapons used by Russia in Syria amounts to “perhaps less than five percent” of the total, Kaufman said.

While its campaign in Syria proved that Russia is capable of using long-range guided weapons and also demonstrated other improvements in the air since its 2008 war with Georgia, it also revealed serious limitations.

For instance, Russia carried out most of its bombings in Syria with older Su-24M2 and Su-25SM aircraft, which lack targeting pods needed to drop precision-guided bombs. The use of newer Russian Su-34 Fullback multi-role fighters were the only exception to this general trend since they are capable of dropping KAB-500S satellite-guided bombs.

Furthermore, the ability of Russian warplanes to hit small, moving targets with precision-guided munitions has proven extremely limited. Instead, these aircraft relied on unguided weapons and bombs far too big for their intended targets, which Kofman describes as “overkill.”

As with its Soviet predecessor, the Russian military can maul its enemies “in close quarters, but continues to struggle when it comes to actually finding and seeing its intended targets,” Kaufman said.

Russia lagging in the production of drones also haven’t helped. While the Russian military does possess domestically-produced reconaissance and surveillance drones, along with some license-built Israeli models, it has no armed drones to speak of therefore lacks a “recon-strike capability,” Kaufman added.

Also Moscow’s use of naval aircraft in Syria failed to impress given the abysmal deployment of the aging Admiral Kuznetsov aircraft carrier in late 2016, which lost an Su-33 and a MiG-29K in accidents.

Overall, Russia’s campaign in Syria has been a mixed bag. It certainly showed improvements in tactics, strategy and capability. At the same time it demonstrated that Moscow has plenty of room for improvement when it comes to conducting conventional military operations beyond its vast frontiers.