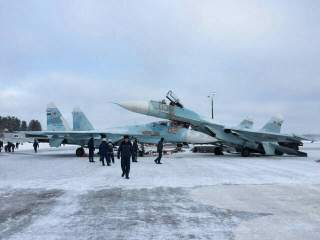 The photo above—taken on December 15—is emblematic of the problems the Russian Air Force faces as it continues to rebuild its strength twenty-five years after the fall of the Soviet Union. While the Russian Air Force has received a lot of much-needed new equipment, such as the Sukhoi Su-30SM Flanker-H, the Su-34 Fullback and the Su-35S Flanker-E, the service is still challenged by a lack of trained personnel. Particularly, experienced pilots are in short supply.

“We have a serious problem with experienced pilots,” a Russian source told me.

While in recent years the Pentagon has faced training challenges as a result of budgetary turbulence—the U.S. Air Force, Navy and Marine Corps aviators are simply not receiving the number of flying hours they once used to—Russia’s problems are far greater. In the aftermath of the collapse of the Soviet Union, funding for the once mighty Soviet military machine collapsed during the 1990s. Post-Soviet Russia, suffering from an economic and social meltdown, essentially ceased modernizing its forces or training its troops during those troubled times.

As a result, entire generations of Russian military personnel did not receive proper training, and critical skills were lost. During the 2000s, when oil prices were high and the Russian economy recovered somewhat from the post-Soviet debacle, Moscow started to reinvest in its military forces. But while the Kremlin has started to modernize its forces, reforms are incomplete and only a small fraction of the Russian military is equipped with the most modern hardware. More problematic is training: often, Russian forces have had to reconstitute skills such as aerial refueling from scratch. The process is long and arduous—and Russia is only part of the way there.

In that sense, more than simply demonstrating that Russia is a relevant great power that cannot be ignored, Moscow’s intervention in Syria has proven to be a boon for rebuilding the Kremlin’s military prowess. The intervention has provided Moscow with an opportunity to validate new capabilities such as long-range precision strike and expeditionary warfare.

“What we see in Syria, of course, is a demonstration of capabilities. They’re using weapons systems in certain situations that are not necessarily required for that tactical situation but they’re demonstrating that they have these capabilities, practicing if you will,” Lt. Gen Ben Hodges, commanding general of U.S. Army Europe, told the BBC. “It’s a live fire opportunity to experiment and train with all of their weapons systems.”

While there is no doubt that the Russian military will gain valuable operational experience with the Kremlin’s Syrian adventure, it will take time for Moscow to incorporate those lessons into its doctrine. In the meantime, the Russia still faces severe economic challenges while it is still struggling to reform the bulk of its military. Only time will tell how successful Russia will be.