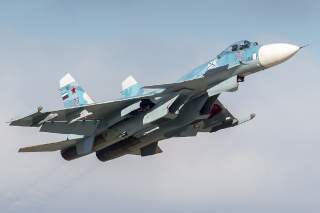 Russian President Vladimir Putin praised the performance of the Russian military and its hardware during the Kremlin’s campaign in Syria, but stressed that Moscow has to fix problems that were brought to light during those operations.

“The rout of the well-equipped terrorist groups in Syria demonstrated the power of our Army and Navy, and the course of the operation demonstrated the tradition of reliability and effectiveness of Russian weapons,” Putin said in a speech.

Putin noted that Russian forces used some 215 new types of advanced weapons systems in Syria. Moreover, the Kremlin demonstrated its new long-range precision guided conventional strike capability under operational conditions in Syria–less a necessity in fighting insurgents in the Middle East than a shot across NATO’s bow.

“The first experience of the combat use of long-range air- and sea-based systems proved to be positive,” Putin said. “These were primarily the Kalibr missile and the X-101 missiles that are less known to the public. Strategic aircraft were also used in combat conditions for the first time.”

Putin also praised the performance of Russian tactical aviation, naval and air defense forces operating in the vicinity of Syria. “Tactical aviation and drones also performed well enough for their objectives, to put it modestly,” Putin said. “Supported by fighter aircraft, the S-400 and Pantsir air defense systems guaranteed the superiority of our Aerospace Forces in Syrian air space. Clear control over air traffic was established in the skies of the entire region where strong air force groups of several countries operated. Navy forces were also well coordinated. Warships and submarines dealt precision and concentrated strikes at terrorist infrastructure. In addition, Su-33 and MiG-29K ship-based aircraft took part in hostilities for the first time.”

However, while the overall performance of Russian forces in Syria was good according to Putin, the operation did reveal flaws that will need to be corrected. “Some of the weapons and equipment samples revealed flaws in Syria,” Putin said. “The objective control data say as much, as well as the firsthand feedback from our servicemen who took part in the hostilities. I am asking you to carefully study this information and make prompt adjustments to the production process.”

Russia plans to continue modernizing its forces with modern precision-guided weapons. The Kremlin’s new State Armament Plan 2027 (GPV-2027) would continue the current tends in Russian military developments. “We have to take a qualitative step forward,” Putin said. “The recently adopted State Armament Program through 2027 is aimed at addressing this problem, including equipping troops with strike weapons and next-generation reconnaissance weapons systems, and building a powerful technological reserve in the defense industry, something the Army of the future will rely on.”

Of course, time will tell how many of the items in the GPV-2027 will actually come to fruition.