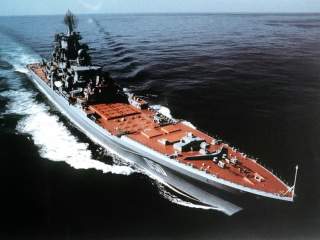 “The Pyotr Veliky will start repairs in the third or fourth quarter of 2019. Repairs and upgrade are due for completion in late 2022, the ship to be equipped with Zircon hypersonic anti-ship missiles,” a Russian defense industry source told the TASS news agency on February 19. “The missile is undergoing development testing and will enter service if it passes,” he added.

There is very little information available about the performance of the Zircon missile. However, the weapon has a range of at least 250 miles and will likely be capable of speeds greater than Mach 5.0. Given its sheer speed, the Zircon will be extremely difficult to intercept with current missile defense technology.

Both Pyotr Velikyi and its sister ship Admiral Nakhimov—which is currently being refurbished—are being upgraded with the new hypersonic weapon. Admiral Nakhimov, which will reenter operational service in 2018, will be the first of the Russian goliaths to be equipped with the Zircon.

When Pyotr Velikyi and Admiral Nakhimov reenter service, their current missile launch systems will be replaced with ten 3S-14 vertical launch systems—each of which carries eight rounds. Indeed, Sevmash—the shipyard refurbishing Admiral Nakhimov—signed a contract earlier last year with Almaz-Antey to provide those systems. The addition of the 3S-14 would enable each ship to carry eighty cruise missiles onboard.

While the Zircon would give the two Kirov-class battlecruisers greatly improved firepower against surface ships, the warships are also being provisioned with long-range Kalibr cruise missiles. Those weapons, which were recently used against Moscow’s enemies in Syria would afford the giant warships a very potent land-attack and long-range anti-surface warfare capability.

Meanwhile, both ships will also receive an upgraded air defense capability with the addition of a naval variant of the long-range S-400 and the mid-range Poliment-Redut missile systems. Earlier reports had suggested that the warships might receive the developmental S-500 missile system.