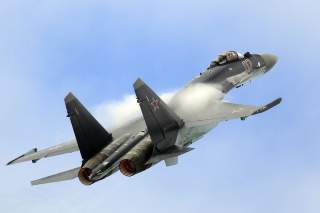 China has officially commissioned its most advanced Russian fighter jet into service.

The news hardly comes as a surprise, but it has huge implications for the region. China signed a $2 billion agreement with Russia to purchase twenty-four Su-35 fighter jets back in 2015. This made China the first foreign customer of the planes. The first four of the Su-35s arrived in China in December 2016. Earlier this year, China received an additional ten planes. Then, in February 2018, China’s Su-35s took part in air combat drills over the South China Sea. According to media outlets, this was the first time Beijing had sent the planes on a public deployment.

The Su-35 is a twin-engine multi-role fighter that is a derivative of the Su-27. While based off of the Su-27, the Su-35 offers a number of significant improvements, leading many in Russia to term it a 4++ generation aircraft. Air Force Technology has said the Su-35 “has high manoeuvrability (+9g) with a high angle of attack, and is equipped with high-capability weapon systems that contribute to the new aircraft's exceptional dogfighting capability. The maximum level speed is 2,390km/h or Mach 2.25.”

This maneuverability is key, and presents significant advantages in dog fights with other aircraft. The Mach 2.25 speed means the plane is as fast as America’s F-22 and faster than the F-35. Furthermore, as Sebastien Roblin has explained, “the nozzles of its Saturn AL-41F1S turbofans can independently point in different directions in flight to assist the aircraft in rolling and yawing.” Again, this is something only the F-22 can match, and its means the Su-35 can “achieve very high angles-of-attack—in other words, the plane can be moving in one direction while its nose is pointed in another. A high angle of attack allows an aircraft to more easily train its weapons on an evading target and execute tight maneuvers.”

Of arguably more importance for China, the Su-35’s high fuel capacity and long range greatly enhances Beijing’s ability to enforce its claims in the South China Sea. In the past, Beijing has had trouble maintaining a regular presence over the enormous waters, which are roughly 1.4 million square miles (2.25 million square kilometers). This can be mitigated by the construction of bases and airstrips on Beijing’s man-made islands in the South China Sea. Still, having a longer-range aircraft like the Su-35 is a better solution for Beijing, allowing it to keep its aircraft on the mainland or bases closer to China’s coast.

The Su-35 certainly affords China that capability. As Peter Wood has noted for The Diplomat:

The Su-35s development was a long time in the making. The first improved versions of the Su-27 appeared in 1989. Developments were slowed with the demise of the Soviet Union and the massive reductions in Russian military budgets in the 1990s. Nonetheless, some improvements—including twin-seats—led Russia to declare a new plane called the Sukhoi Su-30 in 1996. But the development of the actual Su-35 began in 2003, and the first prototype followed in 2007. Two years later production began on the Su-35.

Negotiations between China and Russia over the Su-35 were also fairly prolonged. China first expressed interest in purchasing the jets in 2006, and Beijing and Moscow spent the better part of five years trying to reach an agreement. In 2012, the two sides signed a preliminary agreement but talks continued to encounter obstacles. Most of these roadblocks related to technology transfers and Russian concerns that Beijing would reverse engineer the Su-35. This is what occured when Russia agreed to sell China 200 Su-27SKs for $2.5 billion. Later, China debuted its own version of the Su-27 called the J-11B. Russia ended up cancelling part of that contract in protest of the J-11B.

There was also speculation that China was seeking the Su-35 for its engine, which some believed Beijing would use on its J-20. “I assume the reason why they are buying 24 … is to get hold of some of the embedded technologies," Roger Cliff, a Chinese military expert at CNA, said when the 2015 agreement was signed. “The basic airframe of the Su-35 isn't much changed from the Su-27 and Su-30, which China already has, so presumably they are going after other things such as thrust-vectoring, the Su-35's passive electronically scanned array radar, or its infrared search-and-track system.”

Indonesia is the only other country that has signed an agreement with Russia to purchase the Su-35, although other countries—like India—are also said to be interested.