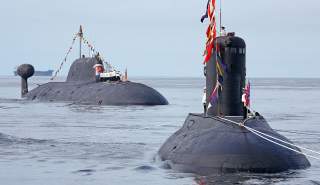 Russia is set to launch its second Yasen-class nuclear-powered attack submarine on March 30. Called Kazan, the new vessel is an upgraded Project 885M design that is in many ways much more capable than the lead ship of the class, K-560 Severodvinsk.

"Kazan is expected to be rolled out and put afloat on March 30," a Russian defense source told the Moscow-based TASS news agency.

The Russian Navy will take delivery of Kazan in 2018. Once the vessel is operational, she will be the most formidable enemy submarine that the U.S. Navy has ever faced. “It’s probably the most capable nuclear powered submarine out there fielded by a potential adversary,” Center for Naval Analyses Russian military affairs specialist Michael Kofman told The National Interest.

Indeed, Kazan is expected to be substantially improved over her older sister, the Severodvinsk. The vessel incorporates new technological developments that have emerged since Severodvinsk started construction in 1993. Kazan also incorporates lessons learned from testing the older vessel.

“The 885M is really the first ship of the class,” Kofman said. “The 885M is intended as a substantial improvement, based on the lessons learned from the lengthy development, construction, and testing process for the original 885.”

The Project 885 vessels are a departure from previous Soviet and Russian submarine designs. Unlike older Soviet vessels, the Project 885 submarines are multimission boats similar in concept to American vessels like the Seawolf or Virginia-classes.

“[Severodvinsk] is Russia’s first truly multipurpose submarine,” Michael Kofman and Norman Polmar wrote in the U.S. Naval Institute’s Proceedings journal. “The Severodvinsk is capable of antisubmarine, antiship, and land-attack missions. Among the more interesting features are a large bow sonar dome for the Irtysh-Amfora sonar system and an amidships battery of eight vertical-launch cells that can carry 32 Kalibr (SS-N-27/30 Sizzler) or Oniks (SS-N-26 Strobile) cruise missiles. These antiship and land-attack weapons are particularly significant after Russian surface ships and submarines fired long-range mis­siles into Syria in 2016.”

Russia plans to build a total of seven Project 885M submarines—Novosibirsk, Krasnoyarsk, Arkhangelsk and Perm are currently under construction at the Sevmash shipyards on the White Sea port city of Severodvinsk.

Meanwhile, Russia is planning on developing a follow-on class of attack submarine that would hunt U.S. Navy ballistic missile submarines. According to the authors of that article, “Now in development is a new Russian ‘hunter-killer’ submarine. This SSN will have the primary role of countering Western SSBNs. The new SSN is probably a significant program, but very little is known about it other than construction is slated to begin in the near future.”

The Russians undoubted have the technical skills to develop an extremely formidable new class of attack submarines. The question is does the Kremlin have the financial wherewithal to fund another expensive new defense project.