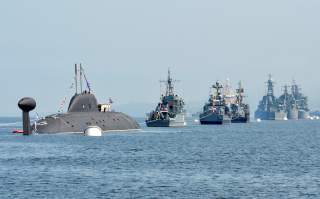 President Vladimir Putin’s speech on the first of March revealed a whole panoply of new nuclear capabilities, from cruise missiles with nearly unlimited range to unmanned undersea vehicles also operating with extraordinary range, together with unprecedented speed and depth capabilities. While the speech was no doubt intended to burnish his reputation for toughness ahead of the mid-March election, these revelations will give Western strategists plenty to talk about as the New Cold War grinds into high gear. Yet these dramatic revelations should not obscure the daily interactions between Russian and U.S. forces in ever closer proximity that could lead to a crisis or worse.

Along the maritime periphery of Russia, tensions continue to escalate. Russian warships sortied en masse into the Baltic Sea on 20 February as part of a readiness drill, and in January, Russian news reported that a U.S. drone made a long-range intelligence-gathering sortie along Russia’s Black Sea border in the vicinity of Kerch, Sochi, and the Crimea. Now, it is reported that two U.S. Navy destroyers have been patrolling in the Black Sea. Predictably, Russian media reports have been critical of this deployment, suggesting that it is a provocation similar to those that occurred during the Cold War.

In particular, they do not appear to have taken well to a Pentagon spokesman’s apparent suggestion that Moscow should get used to the presence of the U.S. military in that particular area. One such Russian analysis quotes a foreign commentator, explaining that “… if the situation worsens the bottom of the Black Sea could become a cemetery for American destroyers” [что при осложнении обстановки дно Черного моря может стать кладбищем для американских эсминцев.]

Putting aside the bellicose rhetoric amidst escalatory moves, a remarkably interesting short article appeared in the Russian naval press on Valentine’s Day. This article reports out on an apparently annual estimate of Russian fleet combat power compared to that of the U.S. Navy. This is not quite the Russian equivalent of the famous “Soviet Military Power” report of the 1980s, but it is nevertheless interesting to see how Russian naval strategists evaluate the naval balance. The intriguing bottom line is that this report places Russian fleet combat power at 47 percent of that of the U.S. Navy. According to the article, last year “… the Russian fleet not only succeeded in maintaining its position, but it even strengthened its situation with respect to the U.S. Navy” [российскому флоту удалось не только не потерять позиций, но даже несколько укрепить свое положение относительно американских ВМС].

That number has fluctuated considerably in recent years, according to a colorful bar graph in the same article, reaching as high as 63 percent in 2010, but then falling off quite precipitously and reaching a low of 42 percent in 2012 before beginning a slow climb to the present figure with the exception of another major drop during 2014–15. These drops are not explained in the article, but likely are the result of the on-going problem of “block obsolescence” that has plagued the Russian Navy for decades as Soviet-era ships reach the end of their service lives. A relatively clear and simple methodology for calculating these figures is provided that applies a combat power weighting to each type of ship. For example, nuclear attack submarines (SSNs) have a combat value of five, while corvettes have a value of just one.

Concerning the last year, the report notes with some disappointment: “Alas, in 2017, the military shipbuilding industry did little to please the Russian Navy” [Увы, в 2017 году отечественное военное судостроение мало чем смогло порадовать ВМФ России]. “The only new ships delivered were one new frigate, Admiral Makarov, and a corvette, Sovershenyi. By contrast, the article notes that in 2017, the U.S. Navy received the new Ford–class aircraft carrier, two Burke-class destroyers, two Virginia-class nuclear attack submarines, and three littoral combat ships (LCS). Other Russian media reports decried a situation in which the U.S. built eight warships, including some very potent classes, while Russia produced just two relatively small surface vessels. It is also noted that Russia’s fleet received two ballistic missile submarines (SSBNs) back from modernization, Ryazan and Tula. The authors of the report concede that such numbers would make one expect a major retreat in the relative position of the Russian fleet, except that “given the extensive data available in the press regarding the U.S. Navy,” [учитывая большой объем публикующихся в СМИ данных об американском флоте] the editors were able to implement a corrective to the data that accounts for U.S. Navy ships going into the yards for refit.

Changing the metrics is one approach to making the somewhat bleak “balance” look more favorable for Russia. But the outlook for 2018 is not any better, according to this Russian analysis. The U.S. Navy, it is reported, will likely receive at least three additional Burke-class destroyers, two more Virginia-class submarines and another three LCS. The Russian Navy awaits commissioning of the new frigate Admiral Gorshkov and the large amphibious attack ship Ivan Gref. But the Russian report’s author is not particularly optimistic, noting wistfully that “moving timelines to the right has already become a tradition” [сдвигать сроки вправо стало уже традицией]. Indeed, one does not have to look very hard to find deep pessimism among Russian naval strategists. For example, a survey of Russia’s submarine force from December 2017 characterized Russia’s fleet revitalization as a “fiasco” [фиаско]. Reading such candid appraisals, one must credit the Russians with an admirable level of transparency in openly discussing their challenges.

On that point, this report comparing Russian and American fleet strength makes a final interesting observation: “Over the last few years, the Chinese Navy has been undergoing an intensive buildup.” Yet, no explicit comparisons are made because, according to the authors: “… Beijing tries to keep exact data about its warship building programs secret, so therefore objectively evaluating the combat potential of the Chinese fleet does not seem possible” [Пекин старается держать в секрете точные данные о своей кораблестроительной программе, поэтому оценить объективно боевые возможности ВМС КНР не представляется возможным]. So, it appears that it is not just Americans who are frustrated by China’s lack of military transparency.

If we return to the central theme of Russian-American military rivalry, one is left asking why the United States is fretting to such an extent about a Russian Navy that itself admits that (on a good day), it has almost half the combat power of the U.S. Navy. There is, of course, no serious evidence to think that in a naval conflict with the U.S. that the Chinese Navy would come to the Russians’ rescue. Yet, behind the U.S. Navy will certainly stand the large naval force of Japan, medium-sized navies equipped with nuclear submarines like those of the UK, as well as small and very capable navies, such as those of Norway or Netherlands. Never mind navies like those of non-NATO members like Sweden that would most likely team with NATO in any European war. The point is that the Russian Navy is stretched to the limit and rather thoroughly overmatched. Some proponents of the New Cold War would surely like to see the Russian Bear cut a more threatening figure, but it’s just not the case. Russian military prowess should not be underestimated (e.g. Zircon), of course, but surveying these odds, overall, one can almost sense the anxiety (and likely paranoia) that may characterize much of contemporary Russian military strategic planning. These concerns may indeed partially explain Putin’s evident fondness for new and innovative nuclear weaponry.

One wonders if the many Russia hawks in the United States and the West generally have fully thought through the implications of embarking upon a new Cold War with Russia (and simultaneously with China). We have adopted this course without a full and rational debate—apparently after an alleged e-mail hack and some kitschy Facebook advertisements have brought U.S.-Russian relations to an inexplicable nadir not seen in decades. This travesty not only imperils the entire world on a nearly daily basis in the case of a geopolitical “mishap,” but is certain to squander mind-boggling sums of wealth that will leave all of our grandchildren and their progeny wondering what we were possibly thinking.

Image: Russian warships sail during a rehearsal for the Navy Day parade in the far eastern port of Vladivostok, Russia, July 30, 2016. REUTERS/Yuri Maltsev