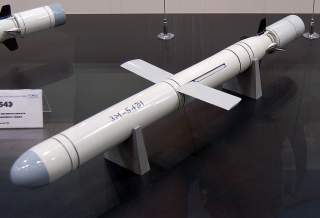 Russia has by far the largest icebreaker fleet in the world with a total of more than 40 publicly and privately owned, including six nuclear-powered icebreakers all capable of punching through Arctic sea ice. It’s also building new ones after a delay of more than four decades, launching the 33,500-ton Arktika in June 2016 and preparing to introduce the 6,000-ton Ilya Muromets into service in fall 2017.

After that, Russia will introduce the 7,000-ton Ivan Papanin, or Project 23550. Except one important addition will be two Kalibr-type anti-ship cruise missiles and a 76-millimeter AK-176MA naval gun in a turret designed to provide a low radar cross-section.

While it’s simple enough to give sailors a shoulder-fired anti-air missile or small arms, an icebreaker with dedicated weapon—more akin to a destroyer—is a little unusual.

It’s not unheard of. The Norwegian Coast Guard’s 6,375-ton icebreaker Svalbard, while small compared to the largest icebreakers, is Norway’s biggest military ship and carries a 57-millimeter Bofors cannon. Concept art of Ivan Papanin bears a close resemblance to Svalbard, and could very well be inspired by it.

Canada’s upcoming Harry DeWolf-class icebreakers are close facsimiles of the Norwegian ship. Russia’s enormous nuclear-powered icebreaker Sibir, which served from 1978 to 1992, was also once photographed with a deck gun.

Icebreakers have taken on strategic importance as declining sea ice due to global climate change promises to open up vast reserves of oil in an area with a jumble of maritime boundaries and competing claims.

Icebreakers are primarily peacetime vessels designed to carve passageways for civilian shipping, but the vessels with their strengthened hulls and ice-smashing bows and sterns could similarly clear a path for warships in the event of a conflict.

Armed icebreakers could patrol those claims, and just as importantly, enforce them … in theory. The United States by comparison has only two operational icebreakers, and is funding a third. But most of the Arctic’s resources are already apportioned, as Andreas Kuersten recently pointed out, and icebreakers are less militarily useful than as popular media accounts make them out to be.

For one, Russia is starting at a disadvantage because it requires a large number of icebreakers to clear approaches to and from its northern shipyards. And while these ships open up further paths in the Arctic for follow-on warships to maneuver, those vessels must follow the icebreakers in a predictable fashion—which makes them vulnerable to attack from submarines, far more useful in the Arctic than surface ships.

Submarine warfare is where the U.S. Navy—which possesses 41 submarines capable of punching up through the ice from below—has an stark advantage compared to Russia, which has 25 suitable subs which also sail far less frequently. A new Russian icebreaker with a few cruise missiles and a 76-millimeter gun won’t change that.