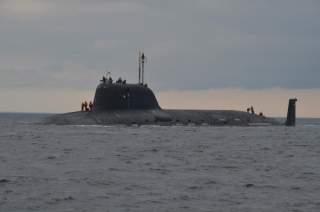 The Russian attack submarine K-560 Severodvinsk has completed its first operational mission. The powerful new boat—the first of the Project 885 Yasen-class—embarked on its first mission earlier this year despite having been accepted into service with the Russian Navy in 2014 due to ongoing sea trials. Indeed, Severodvinsk has been in sea trials since 2011 as the Russian Navy and its contractors struggled to correct technical issues on the new submarines.

“Congratulations to the crew of ASMC ‘Severodvinsk’ on the successful implementation of the objectives of military service and return to home base - the city of Zaozersk!” reads an Aug. 1, 2016, post on the Russian Submariners page on the Russian social media network VKontakte. “The event is significant not only for the submarine fleet, but for the entire naval fleet of Russia!”

Severodvinsk’s first successful deployment would seem to indicate that the Russians have more or less solved the majority of the problems that have cropped up on the new submarine.

Meanwhile Russia is continuing to work on its next SSGN, Kazan, which is an improved variant of the Yasen design that has been designated Project 885M. The Russians have improved on the Yasen-class design since Severodvinsk was originally laid down in 1993 in the aftermath of the Soviet collapse.

The Project 885 submarine is a very capable boat by the estimation of the United States Navy. Indeed, the U.S. Navy admiral in charge of building new submarines had a model of the Russian boat made for his office because he was so impressed with it. More recently, Vice Adm. James G. Foggo III, who is simultaneously commander of the U.S. Navy’s 6th Fleet, Joint Force Maritime Component Commander Europe and NATO’s Naval Striking and Support Forces NATO, told The National Interest that Russian submarines are among the biggest threats the Western alliance faces in the European theatre. “It’s a very impressive submarine,” Foggo said referring to Severodvinsk. “If you look across the design of the Russian Federation Navy, where they have put their resources and their research and development efforts has primarily been in the undersea domain and in the submarine force.”

But while Severodvinsk and her follow-on sister ships will undoubtedly be capable submarines, Russia currently only has one of the expensive new Yasens in service. It is not clear when Kazan and the follow-on boats will be completed, finish their sea trials and be put into service. Given the sheer cost of the new submarines, it is not clear Russia can afford all of the eight planned Yasens. Indeed, according to CNA Corporation’s Dmitry Gorenburg—an eminent scholar on Russian military affairs—the Russian Navy will not be able to complete more than two of the new boats before 2020.

Moreover, even if Russia manages to complete additional Yasens—each one is likely to be a unique configuration. “They’re basically going to be artisanally-made,” Mike Kofman, a research scientist specializing in Russian military affairs at CNA Corporation, had told The National Interest earlier. “Who knows what the next boat Kazan will feature, and the one after that follows it? It’s going to take so long to build them, in reality, they’re not going to be serially produced.”

Overall, there is little doubt that Severodvinsk and her sisters will be capable submarines once all the bugs are worked out. But given that the Russians don’t have the financial or industrial wherewithal to built more than a handful of the new Yasen-class boats, the hysteria over Moscow’s new submarines is somewhat overblown.