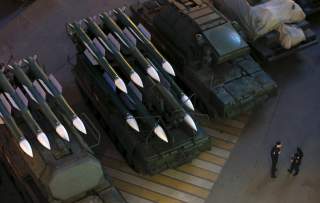 In Kofman’s view, the threat is not as severe as one might expect despite Putin’s strongly worded speech. “Only the cruise missile poses a danger to the nuclear force balance down the line because it is a strategic system uncovered by arms control,” Kofman said. “However, the systems in question are incredibly expensive to be deployed in large quantities and some require unique platforms for delivery, so they are 3rd strike revenge weapons—for example the nuclear powered torpedo is a boutique capability.”

The problem is less on the operational side than on the arms control side of the equation—these new weapons will erode agreements such New START. Indeed, the main second order effect of Russia’s decision to develop these weapons is the fraying of the arms control regime. “First and foremost is the steady melting away of arms control agreements, and their perceived utility in the eyes of peer nuclear powers,” Kofman said. “The stabilizing arrangements we made during the Cold War, for that nuclear age, are falling apart one after the other.”

The long-term risk to the strategic balance and the arms control regime are hard to calculate in the view of former Soviet and Russian nuclear arms negotiator Nikolai Sokov—now a senior fellow at the James Martin Center for Nonproliferation Studies at the Middlebury Institute of International Studies at Monterey. “It is more difficult to calculate, more reasons for one or the other side to suspect the other of winning (disarming) first-strike capability, hence more reasons for an arms race,” Sokov said. “A serious in-depth arms control process is badly needed, but we are unlikely to see it any time soon. Implementation of most of these programs will take pretty long time, so in theory we can engage in talks that could stabilize the strategic relationship, but no one has serious taste for that these days.”

Another potential issue for the new nuclear age is the speed of these new dual conventional and nuclear capable hypersonic weapons. While in the past leaders had some amount of time—perhaps as long as 20 minutes to 30 minutes—to make a decision to launch a retaliatory strike, with the development hypersonic weapons, that time is compressed.

Leaders might only have a few minutes—perhaps as little as five minutes in some cases—decide the fate of the planet. For some leaders, there will be a temptation to launch on warning before confirming if an incoming attack is nuclear or conventional because waiting might mean suffering a disarming first strike.

“The speed of the weapons, and the time of delivery of dual capable weapons is quite problematic from the standpoint of crisis stability,” Kofman said. “Hypersonic weapons pose serious questions about warning, decision making, and the like. We want more time to decide on how to respond, not less—but we are all working on less.”

In that sense, nuclear-tipped hypersonic weapons are highly destabilizing. Thus, arms control negotiations should take such weapons into account in the future, as Sokov noted.

While most of these new Russian weapons have been known to Western arms control experts for quite sometime, Putin’s speech took direct aim at the United States and come just before Russian presidential elections. The timing and the message are not a coincidence. Russia–and Putin himself—seem to be genuinely aggrieved by what the Kremlin sees as hostile American and Western actions.

Indeed, Putin emphasized that everything in his speech was intended to deter what he perceives as Western aggression towards Russia. “I hope that everything that was said today would make any potential aggressor think twice, since unfriendly steps against Russia such as deploying missile defenses and bringing NATO infrastructure closer to the Russian border become ineffective in military terms and entail unjustified costs, making them useless for those promoting these initiatives,” Putin said.

Putin also took aim at the Pentagon’s new Nuclear Posture Review, which called for the development of a host of new American nuclear weapons—and lowers Washington’s nuclear threshold. “We are greatly concerned by certain provisions of the revised nuclear posture review, which expand the opportunities for reducing and reduce the threshold for the use of nuclear arms,” Putin said. “Behind closed doors, one may say anything to calm down anyone, but we read what is written. And what is written is that this strategy can be put into action in response to conventional arms attacks and even to a cyber-threat.”

Experts in Russia agreed that Putin was sending a very blunt message to the Trump Administration—if Washington wants a new Cold War, Moscow is up for a rematch. “The speech can be represented by one huge middle finger aimed at the U.S.,” Vasily Kashin, a senior fellow at the Center for Comprehensive European and International Studies at Moscow's Higher School of Economics, told The National Interest. “They declared a new Cold War on us. We accept.”