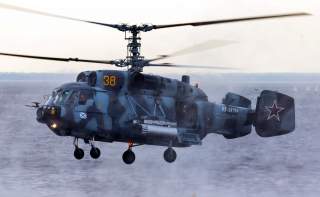 Russia is testing Kamov Ka-27 helicopters onboard its troubled Ivan Gren amphibious landing ship, which is currently undergoing sea trials before the vessel is delivered to the Northern Fleet in March.

“During the trials of the helicopter complex of the large amphibious assault ship Ivan Gren at the Baltic Fleet’s sea training ranges, shipborne helicopters of the Fleet’s naval aviation are performing flights around the warship and landings onto it in various weather conditions in daytime and at night," Russian Navy spokesman Roman Martov told the TASS news agency.

Ivan Gren has had a long and troubled history. The vessel was first laid down in December 2004 and launched in May 2012. Its sea trials began in June 2016 and the ship will not be ready for delivery until at least late February.

“Gren is a typical example of a badly managed naval project which exist in many navies,” Vasily Kashin, a senior fellow at the Center for Comprehensive European and International Studies at Moscow's Higher School of Economics told The National Interest. “The design started 1998, almost 20 years ago. The problem was that the Navy changed the requirements so many times that the project ran into huge delays and the result was disliked by everyone. So as a result the Navy decided to build just two such ships (Ivan Gren and Pyotr Morgunov to be launched this year).”

Russia could develop a true amphibious assault ship in the coming years, but it is not clear if Moscow’s new State Armament Plan 2027 will support such a vessel. “For the future, they have a project for a helicopter carrier amphibious assault ship which they call Прибой (Priboy),” Kashin said. “But it is not clear if the procurement is actually included in the State Armaments Program-2027. I think it will depend on the general economic situation in 2020s.”

Michael Kofman, a research scientist specializing in Russian military forces at the Center for Naval Analyses, told The National Interest that Priboy and another competing design are both the products of the fertile imagination of Moscow’s defense industry. “I don't think Priboy is anything other than a model ship, same goes for the Lavina,” Kofman said.

The Russians do have a requirement for an amphibious assault ship; it is really a matter of time and money as to when the Kremlin orders such a vessel.