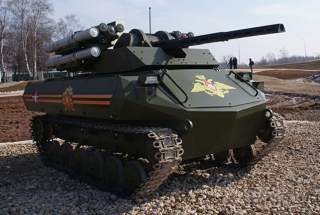 Russian military has been steadily advancing the use of unmanned systems in military operations – its use of unmanned aerial vehicles (UAV) in domestic and international engagements has been well documented.  With the backing of the government and domestic industries, over the past few years Russian Ministry of Defense (MOD) has been actively developing a wide range of unmanned platforms – including unmanned ground vehicles (UGVs). Earlier this year, President Putin himself called for the development of “autonomous robotic complexes” for the military.

While most Russian UGVs are still in the design, testing and evaluation stages, there has already been notable presence of such machines with the Russian armed forces. “Uran-6” demining robot, made by JSC 766 UPTK, has been assisting Russian sappers in Syria, helping clear recaptured areas from mines, IEDs and unexploded ordinance. Designed to operate in extreme environment, this UGV is the first successful battlefield deployment and has been operating in Syria for almost a year at this point. Russia’s agency for exporting military technologies, Rosoboronexport, has reportedly started to offer these machines for export. Uran-6’s larger sibling, armored “Uran-9”, is designed for combat operations - weighing in at 10 tons, it is armed with a 30 mmm cannon, 7.62mm machine gun and anti-tank rockets. Russian military experts think this particular UGV can be used in Syria in the near future in support of Russian ground forces.  There has already been some speculation whether Moscow-allied Syrian forces actually used Russian UGVs in recent operations. A closer international investigation revealed that such use of combat unmanned ground systems probably did not take place, though numerous Russian UGV designs point to their potential use in a variety of combat scenarios.

“Platforma-M”, designed for intelligence gathering and reconnaissance roles, is a UGV that is already  getting integrated into Russian armed forces. Made by “Progress” Science and Technical Institute, it is armed with a 7.62 mm machine gun and 4 grenade launchers, and is built to operate in extreme environments, with temperatures ranging from -30 to +50 Celsius (Arctic to desert conditions). This UGV is already in service with the Russian Pacific Fleet.

In 2013, Russian MOD reviewed “Argo” unmanned ground vehicle – built by the Central Design Institute of Robotics and Technical Cybernetics, this wheeled system is designed for patrol and intelligence gathering, and is also armed with a 7.62 mm machine gun and several rockets. Argo can also be used for conducting amphibious operations and logistics support.

Another Russian UGV in development is a sapper and demining “Prohod-1”, made by “Signal” Design Bureau. This vehicle has undergone state trials by the end of summer 2016. According to designers, its intended to create safe corridors of up to 4.5 (14 feet) meters wide for soldiers and equipment. Unlike Uran-family of vehicles, Prohod-1 can be operated in manned and unmanned configurations.

In 2015, Russia unveiled another heavy armored UGV - “Udar”, made on the chassis of BMP-3 armored vehicle. BMP-3 chassis was chosen by designers as the most versatile platform that is widespread across Russian armed forces, easing potential vehicle maintenance and repair.  Also made by “Signal” Design Bureau, it carries heavy armaments and potentially even a multi-copter drone for greater intelligence, surveillance and reconnaissance role. This heavy UGV will be manufactured in three variants - combat, engineering support and transportation/evacuation.

A few years ago, “Signal” Design Bureau partnered with “Degtyarev” Factory to create another UGV - “Nerehta.” Armed with a variety of weapons including 7.62 mm machine gun, this small vehicle is also envisioned to operate in three variants – combat, intelligence gathering and transportation/logistics support.  Earlier, Russia’s Foundation for Advanced Studies (near-equivalent to American DARPA) chose Nerehta as a research and development platform for a variety of new and emerging technologies, including artificial intelligence (AI) and cooperation with UAVs. Nerehta is often compared to  “Soratnik”, which was unveiled in September 2016 by the “Kalashnikov” Design Bureau during “Army-2016” expo.  This larger 7-tonne UGV was designed for combat, patrol and security roles, responding to the Russian MOD specifications. Both UGVs were recently tested by the Russian MOD, indicating increasing interest in using such systems for combat. Yet another potential UGV  in development and testing stages is “Vihr”, made by “Impuls-2” Design Bureau in Sevastopol. Vihr is a remote-controlled autonomous combat unit consisting of a 30mm cannon on top of a BMP-3 robotic platform.

It should be noted that almost all Russian UGV designs are primed for remote operator use – Russian defense establishment is not yet comfortable with the idea of complete vehicle autonomy in battlefield decision-making.  This attitude may change as Russian military will face a growing number of unmanned combat vehicles across diverse battlefield environments. Much like the unmanned aerial vehicle technology, which one was available only to advanced militaries and has since became available to private citizen and non-state actors, UGV technology is following the same development trajectory – already, there are reports of crude UGV platforms made by belligerents in the Middle East, without the massive investment and industrial backing of governments and defense ministries. And across former Soviet space, Russia is hardly alone when it comes to the development of unmanned ground vehicles for combat operations. One of the more interesting exhibits at the recently concluded IDEX-2017 defense expo, one of the biggest in the world, was a Ukrainian “Phantom” UGV, armed with a variety of weapons and intended for a range of missions. Last year, Russia’s neighbor Estonia showcased THeMIS tactical modular infantry system. It’s a safe bet that as diverse unmanned combat systems become more and more widespread, Russian UGVs will be integrated into regular force operations, changing the way troops cooperate with machines for greater effectiveness and results.