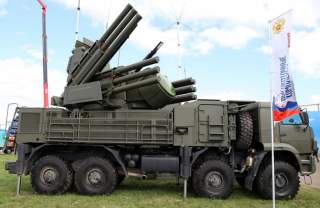 Russia is developing a new mobile air defense system for its elite airborne troops that will be based on the BMD-4M armored vehicle. The new weapon system—which is designed to be parachuted down to ground forces—will be able to protect paratroopers from enemy aircraft operating at high or medium altitudes.

“Work is underway on the on the creation of an air-droppable anti-aircraft missile defense system based on the BMD-4M airborne combat vehicle. The experimental design work is codenamed Ptitselov,” a Russian defense ministry spokesperson told the Moscow-based TASS news agency.

The Russian report does not describe the system in detail. However, given that the Ptitselov—or “Fowler” in English—is based on the lightweight BMD-4M armored vehicle chassis, the system is probably comparable to the Pantsir-S2 anti-aircraft gun/surface-to-air missile system.

The Pantsir-S2 has a range of about 19 miles and can engage targets at altitudes of about 33,000ft. The older Pantsir-S1 can attack two targets simultaneously and can attack as many as 12 targets in less than a minute. Thus, it is reasonable to assume that the Ptitselov will be as capable—if not more so.

The addition of the Ptitselov will greatly increase the capabilities of Russia’s airborne forces, which have previously relied on man portable air defenses to ward off air attacks. The Ptitselov will afford those lightweight—but fully-mechanized—troops some level of area air defense capability similar to other Russian mechanized forces. Russian mechanized forces are usually accompanied by mobile surface-to-air defense systems such as the fearsome Buk-M3 (NATO: SA-17 Grizzly).

Unlike comparable U.S. units such as the 82nd Airborne Division, the Russian Airborne Forces are fully mechanized using the BDM-4-series light armored vehicles—all of which can be parachuted to the ground. There is an infantry fighting vehicle variant equipped with a 100mm low-pressure gun and 30mm cannon called the BDM-4M, the BMD-4K command vehicle and an anti-tank variant equipped with the same 125mm cannon that equips the T-90S main battle tank. There are also a host of other variants. The Russian airborne forces are also equipped with a variety of self-propelled artillery.

Conversely, the U.S. Army has not had an air-droppable tank since the M551A1 Sheridan was retired from active service in the mid-1990s. The antiquated Sheridan light tank was retired without a replacement after the XM-8 armored gun system project—which would have succeeded the M551A1—was cancelled in 1997.

In recent years, the U.S. Army has displayed some level of interest in resurrecting an armored capability for its airborne troops under the Mobile Protected Firepower effort. The Pentagon requested money for the new vehicle in the fiscal year 2017 budget, but the program’s future is uncertain.