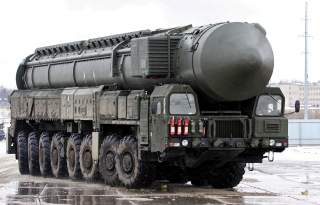 Russian media recently claimed that the Federation’s new intercontinental ballistic missile will be able to penetrate even America’s most effective defense systems—but are they right? Russia claims the new RS-28 Sarmat heavy ICBM, being introduced as part of its nuclear modernization, can wipe out an area ‘the size of Texas or France’. They may be referring to the missile being able to deliver nuclear weapons via the South Pole rather than the traditional ‘over the north pole’ route. It may also be typical Russian grandstanding in an effort to intimidate. Whilst the RS-28 will certainly get US planners thinking about nuclear modernization, it seems unlikely that such hyperbole will have US leaders rushing for the nuclear bunkers.

For starters, the US missile early warning systems means it is not blind to its southern approaches, as it has radars on the east and west coasts that provide coverage out to 5,500 km along the southern approaches to North America. In addition, the US maintains effective space-based missile early warning systems which detect launches. There’s no way the Russians would be able to attack with sufficient surprise to catch US nuclear forces on the ground or to decapitate the US political leadership. In any case, the US always keeps sufficient numbers of ballistic missile submarines at sea to ensure devastating retaliation.

The Russians claim their aim is to circumvent US missile defenses. Yet going the long-way round over the South Pole seems unnecessary given US national missile defense efforts are designed to respond to limited attacks from nuclear armed rogues like North Korea, and potentially in the future, Iran. The US national missile defense capability has just thirty US ground-based interceptors (GBI) deployed in Alaska and California and their effectiveness is very questionable. They could not prevent a large scale Russian nuclear attack. So building large, heavy ICBMs to get around almost non-existent missile defense systems—whichever way the warheads fly—seems a curious thing to do and it suggests the Russians themselves lack a clear rationale for deploying such a weapon. As my colleague, Rod Lyon, has noted, such a missile generates destabilizing dynamics that forces the Russians to fire first in a crisis.

The real significance of the RS-28 Sarmat is the effect it will generate on debates over US nuclear force modernization. It’s likely to begin deployment next year when debate over replacing the aging US Minuteman III force will be gathering pace with the Trump Administration. In characteristic fashion President Trump has tweeted that the US must ‘greatly strengthen and expand its nuclear capability’, amid intense debate within US nuclear circles on issues such as the wisdom of maintaining a ‘launch on warning’ posture, and the continuing relevance of land-based ICBMs. It’s not clear exactly what Trump’s nuclear tweet may mean in the real world of US force structure planning, not to mention budgetary considerations, however Russian nuclear force modernization is directly relevant to US nuclear policy choices.

If the US decides to stick with the ‘triad’, that comprises land-based ICBMs, manned bombers and ballistic missile submarines (SSBNs) carrying ballistic missiles, the RS-28 deployment could force the US to take another look at mobile land-based missiles, last considered during the MX basing studies in the Reagan era, rather than continuing with the current vulnerable silo-based weapons. After all, it is the vulnerability of the silo-based ICBMs that mandates a rapid response ‘launch on warning’ posture to ensure a credible US deterrent. That increases the risk of inadvertent nuclear war, particularly if Russia’s persistence with heavy MIRVed ICBMs accentuates escalatory pressures in a crisis.

Minimizing the risk of nuclear decapitation of one or two legs of the triad (the SSBNs are largely invulnerable), or against political leadership and nuclear command and control, must be a key consideration in this debate. Given this, it may be simpler to take this opportunity to break with the traditional structure of a triad, and go instead towards a ‘dyad’ of relatively invulnerable SSBNs and bombers, with the introduction of around 100 B-21 Raider bombers from the late 2020s. Getting rid of the land-based ICBMs reduces pressure for the US to maintain the risky ‘launch-on-warning’ posture because most of the US warheads will be safely tucked away on submarines at sea that are virtually impossible to find or track. Furthermore, the manned bombers could be dispersed reducing their vulnerability too. There are also measures the US could take to protect its political leadership, further reducing the RS-28’s ability to deliver an effective first strike against the US.

The end result may be that the big Russian ICBM will have few targets left to hit. So the RS-28 Sarmat may ironically force badly needed US nuclear posture change that strengthens US deterrence, and leaves the Russian nuclear forces less credible.