Russia's New Stealth Torpedoes Have a Neat Trick: They Can Pretend to Be Giant Fish 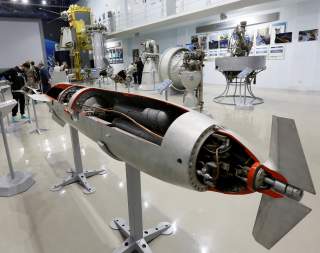 "Hey, that's no turtle. That's a torpedo headed toward us!"

This is what U.S. ship captains will scream too late, if Russia has its way. Russia is promising to develop smart mini-torpedoes that are noiseless, leave no wake—and creep through the water at two to three miles per hour.

These "combat turtles," which are supposed to fool enemy sensors into thinking they are fish, were will weigh less than 100 pounds, according to scientist Shamil Aliyev, described by Russian media as Russia's leading torpedo expert. The idea is to unleash swarms of these weapons that will sneak up on enemy ships.

The project is still in the conceptual stage, Aliyev told Russian news agency RIA Novosti [Google English translation here]. The biggest challenge is equipping the mini-torpedo with Artificial Intelligence (AI). The AI is needed so the torpedo will mimic the behavior of a large fish, "so that no one pays attention to it." In turn, the challenge of designing an AI for a turtle-like torpedo is making it adaptable enough to cope with uncertain conditions. "To make a decision in conditions of uncertainty is twice the task," Aliyev added.

Aliyev foresees swarms of mini-torpedoes as an undersea game-changer:

Now the trend has shifted from heavy torpedoes to light ones, that is from two tons to 35–40 kilograms [77–88 pounds]. It's a fantastic thing. It's a qualitatively different conception. When there is one big man and he needs to be neutralized, this is a difficult task, but it can be solved. But when thousands of “combat turtles” creep and you do not know which one is real, and which is an imitator, this is a problem of a completely different level of complexity.

Regardless of whether Russia's new torpedoes pretend to be turtles or Charlie the Tuna, the fact remains that they would still travel at two miles per hour, or not much faster than a goldfish. Indeed, they sound closer to self-propelled mines.

Bryan Clark, a former U.S. Navy submarine officer and now an analyst at the Center for Strategic and Budgetary Assessments, has his doubts about the concept:

A mini-torpedo lacks the space and power to carry a powerful sonar to detect targets at a distance, nor can it carry sophisticated navigation gear. And even if hits the target, it might not do much damage. "A heavyweight torpedo has a 1000-pound warhead to break the keel on a surface ship or rupture the pressure hull of a submarine," Clark says. "An 88-pound torpedo will probably have a warhead of only about 45 pounds. If it is a shaped charge, that could be enough to puncture a submarine pressure hull. But it would need to be precisely placed and be able to get right next to the submarine. That would be hard at only 3 to 5 knots."

However, Clark does believe these torpedoes could be useful against fixed targets like underwater cables and pipelines. But rather than torpedoes, he likens the Russian concept to unmanned underwater vehicles, or UUV. The United States and other nations are aggressively trying to develop small drones that will operate in swarms to flood the battlefield with cheap, lethal robots.

As for stealth, Clark points out that Russia will first have to suppress the mechanical noise of the torpedoes. Then, Russia must make the torpedo resemble an undersea creature. "If you go to the effort of making a UUV quiet, why incur new costs to create it more detectable in the hopes it will sound like a fish?"