Russia's New Tanks Have Poland and the Baltics Nervous. Here Is How They Are Responding. 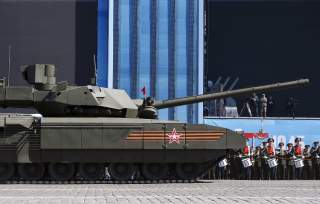 Infantry anti-tank systems are the last line of defense against enemy tanks and armored fighting vehicles. As tank technology has advanced, infantry anti-tank weapons often struggle to keep up. This is painfully obvious when looking at NATO’s Eastern flank, as the Cold War–vintage anti-tank weapons of Poland and the Baltic nations face down some of the newest armor in the world. Despite this grim outlook, the situation is improving as these countries slowly modernize their anti-tank (AT) arsenals.

One of the least potent infantry AT weapons in the Polish arsenal is the RPG-76 “Komar,” (Mosquito). Developed in the 1960s and 1970s as a lightweight anti-tank weapon, the Komar can penetrate around 260–300mm of RHAe (Rolled homogeneous armour) with its 68mm warhead. It saw limited use as an anti-personnel and anti-structure weapon by Polish soldiers during the Iraq War. Its primary advantage is its light weight, which allows a user to potentially carry multiple launchers. While the Komar is being phased out of service—due to being practically useless against Main Battle Tanks (MBTs)—it would potentially be a serviceable weapon against armored personnel carriers (APCs), infantry fighting vehicles (IFVs) and lightly armored support vehicles.

Poland and all of the Baltic nations continue to field the RPG-7, the infamously prolific Soviet AT weapon. The primary warhead in use in the Polish Army is the PG-7VM round, which only has 300mm of RHAe penetration. Attempts were made to develop newer rounds with the Bulgarians and later Germans, which yielded fruitful results—but were not adopted. Heavier warheads, like the tandem HEAT PG-7VR in use by the Russian Army, are not fielded by any of these nations. Various optical sights of foreign and indigenous nature are used on the Polish RPGs.

The Swedish Carl Gustav M2 and M3 are also used by Poland and every Baltic nation. In Polish service, they are issued primarily to airborne and special forces units. In contrast, they appear to be pretty widely distributed among regular grunts in Lithuanian and Estonian service. The Gustav has higher penetration with single HEAT (high-explosive anti-tank) warhead ammo than the RPG-7, at 400mm RHAe. Still, this is unlikely to defeat any modern Russian tank from a frontal aspect. This can be improved with modern tandem HEAT rounds, but it’s unknown whether these are being fielded by any of these nations. In Lithuanian service, the M2 and M3 are used with the standard issue 3x scopes, but the Carl Gustav has a modular sight rail and can also be used with ironsights or night vision scopes.

Poland is looking to replace their legacy RPG-7 and Komar systems with a more modern launcher for frontline use and possibly for its new territorial defense forces. For this role, they are considering a multitude of systems. The American Airtronic PSRL-1 (a modernization of the RPG-7), the Spanish Instalaza C90 and C100, additional Carl Gustav M3 or M4s, and the Panzerfaust 3 are all in the running.

Moving onto crewed recoilless rifles, we see some divergence between Poland and the Baltic nations. Poland fields the Soviet-designed SPG-9 73mm recoilless rifle. As the projectiles have stronger rocket boosters and a faster initial speed than those coming out of the RPG-7, the SPG-9 has superior range. It’s used by Polish Airborne forces and there are plans to provide it to the new territorial defense units. As with above systems, it has only around 400mm RHAe penetration.

In infantry ATGM (anti-tank guided missile) systems, each country has gone their own way—with the exception of Latvia and Poland. Both of these countries field the legacy Soviet 9K111 Fagot missile, which can shoot out to 2.5km with 400mm penetration. This is augmented by the newer Israeli Spike-LR missile, which has a tandem warhead with 700mm+ RHAe penetration and can fly on a lofted trajectory to hit the top armor. The missile warheads and rocket motors are license produced locally to reduce costs in Poland. There also is a special variant of the KTO Rosomak APC designed for Spike missile teams, that can carry two launchers and additional missiles into the field. Poland also fields other Soviet era ATGMs.

Lithuania, on the other hand, primarily uses the American Javelin system, and has procured around 100 Command Launch Units (CLUs) and around 300 missiles. Estonia also plans to buy the Javelin, but also bought the German/French MILAN 2 missile as recently as 2016 (which ironically, is being replaced in French service by the Javelin). These have a penetration of around 800mm RHAe. Estonia also fields the MAPATS, an Israeli adaptation of the American TOW missile that uses laser guidance in lieu of wires.

In the future, Poland hopes to develop the Pirat light ATGM, a laser guided design that will be able to fly out to 2.5km. It’s being developed with assistance from Ukrainian industry, which has built a similar light ATGM in the Corsair. The penetration is speculated to be 550mm RHAe after defeating explosive reactive armor (ERA). A major advantage of this system over Spike is the lower cost.

Overall, most infantry AT systems in the Polish and Baltic arsenal would not fare well against the latest version of Russian tanks. Many of Moscow’s main battle tanks (MBTs) have active protection system (APS) and Heavy ERA modules that would likely prevent penetration from most handheld launchers and some ATGMs. However, the sheer number and saturation of these weapons would allow the infantry to pose a significant threat to any lighter vehicle they encountered on the battlefield, as well as the flanks of the new MBTs. The common use of the Carl Gustav could be beneficial, as the U.S. Army is also adopting the weapon, pushing costs down of new ammunition types and allowing for sharing of ammunition in the field. Polish and Baltic doctrine appears to be very focused on the saturation of AT assets on the battlefield, as one of the fastest ways to stop a mechanized advance is to destroy all vehicles in support, if not the tanks themselves.

Charlie Gao studied political and computer science at Grinnell College and is a frequent commentator on defense and national-security issues. He can be found on Twitter @izlomdefense.