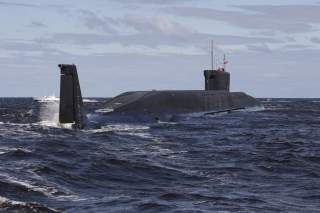 Russia’s first Project 995A Borei-class nuclear-powered ballistic missile submarine (SSBN) is set to be launched on November 17 in Severodvinsk. The vessel, called Prince Vladimir (Князь Владимир—transliterated as Knyaz Vladimir) is an improved version of the original Project 955 SSBN, three of which have been completed for the Russian Navy.

Compared to the three older Project 995 boats, Prince Vladimir has a better acoustical stealth, better electronics and improved living spaces for the crew. Like its predecessors, the new SSBN will be armed with 16 D-30 Bulava submarine launched ballistic missiles. Prince Vladimir is the first of five Project 995A ballistic missile submarines to be built for the Russian Navy. The remainder of the Project 995A boats—Prince Oleg, Generalissimus Suvorov, Emperor Alexander III and Prince Pozharsky are in various stages of construction.

However, the Russians are continuing the development of the Project 995 class beyond the eight vessels that have either been built or are in construction. Recently, Russia’s chief of the general staff, Gen. Valery Gerasimov announced that the Kremlin would develop a third iteration of the Borei design—the Project 995B. "Work to create the advanced Borei-B nuclear-powered missile underwater cruiser has started," Gerasimov said at a Defense Ministry Board meeting according to the TASS news agency.

There are no details available about the new Borei-B, except that it would be technologically more advanced than the original Borei and the Borei-A. In the meantime, the Russia’s new State Armament Plan (abbreviated as GPV 2018-2027) which will run from 2018 to 2027, calls for the development of the new Husky-class submarine.

The Husky will be developed in three variants. One version will be a basic nuclear-powered attack submarine while a second version will be an SSGN or cruise missile carrier. A third version would an another ballistic missile submarine design to complement or potentially replace the older Boreis or remaining Delta-class vessels.

The idea is similar to how the United States Navy developed its Virginia-class submarine, which has evolved from an attack submarine into a cruise missile carrier with the addition of the Virginia Payload Module. An indeed, the U.S. Navy’s forthcoming Columbia-class ballistic missile submarines are in many ways an enlarged derivative of the Virginia-class design. The Russians intend to follow the same pattern with their Husky-class.

One of the surprises in the Kommersant report that has caught many military analysts by surprise is that the SSBN version of the Husky will apparently be armed with a liquid-fueled SLBM. It is possible that the report is in error and the new submarine will be armed with a solid fuel missile, however the Russians continue to arm their Delta-class SSBNs with versions of the liquid-fuel R-29 SLBM.

However, many Russian and American military analysts specializing in Russian defense issues are skeptical that the Husky SSBN variant will ever be built, thus, it might not matter what the GPV says when it is formally released. In the near term at least, since the Husky is at best in its developmental phase, there is no chance that there will be any procurement rubles—allocated to the project.