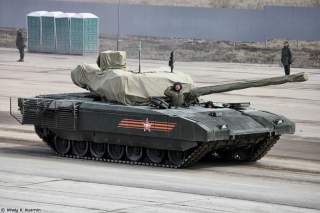 Vladimir Putin has told the West that it has nothing to fear, yet the conflict in Ukraine is flaring again. Ukrainian President Petro Poroshenko is warning his citizens of a full-scale Russian invasion. Contacts between NATO and Russian forces have increased markedly. Reports of Russian strategic bombers close to the UK, and of a Russian submarine in Finnish territorial waters, have grabbed headlines. Last year, NATO scrambled fighters over 400 times to head off suspected Russian incursions into European airspace.

On this basis it would seem reasonable to conclude that Moscow sees its primary security dilemma lying to its West. Certainly, Putin has been keen to demonstrate that Western sanctions are not denting his vision of Russia as a great power. He has prodded Scandinavian nations into reconsidering joining NATO and alarmed the Baltics with exercises close to their borders.

But the Ukraine crisis—and the broader Russia-West tensions tat it has stoked—obscures the fact that Moscow has been quietly but rapidly re-orienting its strategic posture. And it is doing so to the east, not the west.

For Putin, the logic of an Asian pivot is threefold.

The first concerns consolidating Russia's prosperity as an energy and resource giant. He knows that Indo-Pacific appetites for oil and gas will increase massively over the next twenty years. Within the same time frame, European clients will diversify their energy sources once the U.S. shale gas and oil revolution brings American exports on-line. Russia therefore has a relatively small window of opportunity to begin crowding out competitors for Asia's energy demands.

Second, whereas Moscow's strategic posture has long stressed the need to look east, it has now begun increasing its Indo-Pacific trade and security footprint, including in Southeast Asia, in order to give its intended policy substance.

Third, Russia is betting that the 21st century will be an Asian one--and it is betting on China as the main driver of change in regional and global order. Until recently, the main question hanging over Sino-Russian relations was whether Moscow could live with being a junior partner to Beijing. It seems that question has now been answered in the affirmative, at least for the moment.

Russia's pivot to Asia is resulting in a large-scale revamp of its Pacific Fleet. Over the next ten years the fleet will go from Russia's smallest to its biggest naval asset. As part of an overall military build-up costing about US$600 billion, the fleet is getting new ballistic-missile submarines, attack submarines and surface combatants. The two French Mistral helicopter carriers held up over the Ukraine crisis are earmarked for Vladivostok too. And more than just expanding numbers, Russia is keen to show it can project power: its ships are now regularly seen in the Pacific and Indian Oceans.

The Sino-Russian relationship has also entered a more mature phase. Often criticized as being a mile wide and an inch deep, cooperation between Moscow and Beijing is now comprehensive. It spans trade, investment, energy, institutional engagement and military-security ties. The recent Chinese-Russian naval exercises in the Mediterranean, for instance, were partly symbolic. But they would have been unthinkable even a few years ago. Just as unthinkable, in fact, as Chinese troops marching in Red Square, which occurred at the May 11 Victory Day celebrations in Moscow. Much of the development of Russia's Far East is being bankrolled by Beijing. And in the Shanghai Cooperation Organization (SCO), Russia has acquiesced to Chinese preferences for the institution to be an energy-trading club rather than a military-security organization.

Meanwhile, Russia and India already have strong security ties. About 70% of Indian military hardware is Russian. The two nations have been participating in the Indra bi-annual exercises since 2003. Moscow has repeatedly invited India to become a full member of the SCO. And Russia has a deal to construct about 20 nuclear reactors in India at a cost of U.S. $43 billion. Considering India has been a major target of recent Australian diplomatic and trade efforts, it is instructive that Russia and India are now considering an oil pipeline as well as a gas pipeline. The main (and thorny) obstacle is whether they transit through China or Pakistan.

Russian engagement with Southeast Asia has also picked up. It now has a “comprehensive strategic partnership” with Vietnam, and Hanoi has agreed to a free trade agreement with Putin's Eurasian Union. Russia is operating aerial tankers from Cam Ranh Bay to refuel its bombers in the Western Pacific. Last year, Russia and Vietnam agreed to simplify procedures for visits by Russian ships.

Post-coup Thailand is also being wooed. A Russian naval battle group visited in March, and there are discussions on deals for rail services, military aircraft, and tanks. Russia is trying to sell more Sukhoi fighters to Indonesia, and recently promised to include technology transfers in the deal. Other weapons sales being discussed include submarines, amphibious vehicles and helicopters.

Russia is poised to become a big player in Asian energy markets, where Australia has a large stake in future growth. In fact, Australia's recent 2015 Energy White Paper foresees increasing trade as fundamental to our energy security, and the Department of Industry's Bulk Commodity Exports reports see Australia attempting to meet 60% of Asia's increased LNG demands by around 2025.

But here's the problem: Russia is planning to meet 100% of Asia's increased demand by the same time, via its massive development of the Far East. And by the time its $400-billion deal with China starts deliveries in 2018, China will be importing more Russian gas than Germany does now. Putin's abandonment of the South Stream pipeline and his decision to run it to Turkey allows Russia to sell the same amount of gas (6.5 million tonnes a year) into the EU via Greece, but with the capacity to re-route to India and Asia. Russia is also diversifying to a more balanced mix between pipelines and LNG, so that it will be looking to compete directly with Australia. An example is its LNG plant on Sakhalin Island, which will be handling 5 million tons annually from 2018.

Putin also wants to compete on coal. Over the next 20 years, the place of coal in China's energy mix will go down, but will still represent over half its primary energy needs. Russia plans to quadruple coal output by 2030. It is building two new coal ports on Pacific coast able to handle around 40 million tons annually. As Australian exporters know, the coal market is already flooded. But with the depreciation of the Ruble, Russia's share of Asia's coal market has actually increased from 17% to 35%.

Implications for Australia and the Region:

For a long time, Canberra has considered Russia an invisible actor in Asia. That was justified, given its weakness for much of the 1990s and 2000s. But now that posture is looking less viable, especially since Putin has made his Asian tilt Russia's 'national priority' of the 21st century.

The response to Putin's pivot must be premised on a sober assessment of Russian capabilities and intentions. Moscow faces big hurdles in infrastructure development to bring about its energy goals. Its relationship with China has been deepened by necessity rather than a sense of mutual trust. And its boldness is built on a perception of future weakness rather than on strength.

But are the Russians coming? Yes. How much will it matter to Australia? Perhaps we should start having that conversation.