Russia's Next Submarines Will Be Small, Super Stealthy and Multirole? 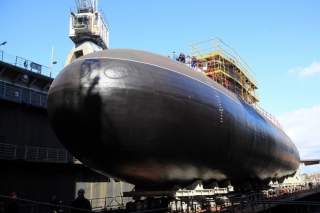 Russia’s next-generation submarines will be smaller and stealthier than Moscow’s current fleet, but officials from the Rubin design bureau contend that the Kremlin should invest in specialized designs rather than multirole boats.

Russian designers believe that the concept of a modular submarine design is possible, however a multirole boat would be an expensive jack-of-all-trades but a master of none. The Russian philosophy stands in stark contrast to the U.S. Navy’s doctrine of building multirole submarines such as the Virginia-class nuclear attack submarine, which was designed to perform almost every mission with the exception of strategic nuclear deterrence.

“The designers’ thought is never restricted. Everything can be combined and matched. Technically this is possible. But will it make sense?” Igor Vilnit, general director of the Rubin design bureau, told the Moscow-based TASS news agency. “The modular principle is reasonable, but the way I see it, it is largely applicable to specific technical means and equipment, some devices, radio electronics and power production. Each submarine has its own task. Creating a ship capable of coping with a hundred tasks while in reality it will be performing just one function will be costly and ineffective.”

The Russians are currently working on a next-generation attack submarine under the project name Husky. The new attack submarine is reportedly being developed in two variants—one version would be an “interceptor” similar in concept to the Project 705 Lira (NATO: Alfa-class) or Project 945 (NATO: Sierra-class) submarines while the other would be guided-missile submarine (SSGN) to designed to replace the Project 949A Antey-class (NATO: Oscar II).

One of the reasons that the Russians are already looking at next-generation replacement attack submarines is because the new Project 885 Yasen-class, while extremely capable, is also extremely expensive. Moreover, construction of the eight planned Yasen-class boats is taking a long time—as Center for Naval Analyses senior research scientist specializing in Russian military affairs Dmitry Gorenburg had earlier told The National Interest. Because the Yasen-class is so expensive and takes so long to build, the Russians might need to look at alternative designs.

The Russians probably have a good chance of recapitalizing their fleet if they are able design a cheaper and more producible submarine design. “I can't see any reason why not,” said Michael Kofman, a research scientist specializing in Russian military affairs at Center for Naval Analyses. “Dmitry and I have been arguing for a while that the Yasen-class is too expensive to be realized past those laid down and they are unlikely to complete anymore. It is simply not a submarine that can be produced in suitable numbers.”

But in addition to recapitalizing its nuclear submarine fleet, the Russians have to design a successor to the Kilo-class—which is still an excellent boat despite its age. The Russians’ first attempt to replace the Kilo with the Project 677 Lada-class submarine proved to be a dead-end—Moscow simply failed to design a practical Air Independent Propulsion (AIP) system. “Russia also needs to figure out a workable diesel-electric design to succeed the 636.3, and while they have several prototypes—likely four of which will ultimately become their own class of submarine—it’s unclear what the ultimate decision is on AIP,” Kofman said.

The Russians are currently working a design called the Kalina to succeed the Kilos. It is possible that Moscow could equip the new boats with an AIP, however the Russians might also simply adopt extended capacity battery packs for its new boats.