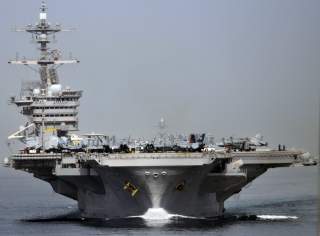 Russia is likely to build larger surface combatants in the coming years—with larger corvettes and frigates in the works. However, Moscow is not likely to spend large sums of money to build massive new vessels such as the gargantuan 14,000-ton Leader-class nuclear-powered destroyers or 100,000-ton Storm aircraft carriers. Instead, Russia will likely build scaled up versions of existing warship designs.

“Russia’s corvettes and frigates are set to get bigger in order to accommodate larger magazines and more weapon systems,” Center for Naval Analysis research scientist Michael Kofman wrote in his personal blog.

“The general direction is heavier corvettes and frigates, with modifications in existing designs and some new ‘heavy’ variants afoot.”

Indeed, the Leader-class is unlikely to ever be built. Moscow will more likely build a smaller and more cost effective vessel based on its Project 22350 Admiral Gorshkov-class frigates. The new “Super Gorshkovs” are likely to displace about 8,000-tons, which is about size of a normal destroyer.

“The absence of gas turbines from Ukraine stalled out Gorshkov-class frigate production at two, and created an opportunity for further expansion of the design to the ‘Super-Gorshkov.’ That suggests there will be 2-4 Gorshkov-class frigates in this series, and then something new that’s at least 1000 tons larger,” Kofman wrote.

“The Gorshkov redesign is a problem turned into a feature in Russian naval procurement. Super-Gorshkov is moving forward as a reality, perhaps going up as high as 7000-8000 tons in displacement.”

At 8000-tons, the new Super Gorshkovs would be larger than most frigates such as the 6,700-ton French-Italian FREMMs or 6,400-ton Spanish Álvaro de Bazán class (F100)—and would thus be more appropriately categorized as destroyers. Indeed, the new Russian vessels would be comparable to the 7000-ton Australian Hobart-class or 8,500-ton British Type 45 destroyers in terms of size if not capability.

“This would substantially expand the current Gorshkov design and raise questions as to whether or not Russia really needs a new destroyer,” Kofman wrote.

“In truth, the upcoming state armament program GPV 2018-2025 is probably not going to fund a single Leader-class, but it may pay for several ‘super-Gorshkovs’ which could be considered a cheaper, more practical, and less exuberant platform that will still have potent capabilities (once they get air defenses to work).”

Other analysts, such as Dmitry Gorenburg at the Davis Center for Russian and Eurasian Studies at Harvard University also agree that the Leader-class destroyers will probably never be built.

“The Lider destroyer, a 14,000 ton nuclear powered monstrosity that was once supposed to be under construction beginning in 2019,” Gorenburg wrote.

“I have grave doubts that we will see construction start this decade, and there’s a decent chance that these ships won’t be built at all, given their high cost and the reduced priority the Navy will receive in the new State Armament Program that is expected to be approved later this year.”

In addition to the new super-sized Gorshkov-based frigate/destroyer, the Russians are likely to focus on up-sized corvettes.

“This is probably the consequence of a general dissatisfaction with the performance and characteristics of the Steregushchiy-class corvette (project 20380) which began at 2200 tons.”

There is a debate in Russia as to whether their navy needs additional smaller green water surface combatants. If Kofman is correct, the Russians are now leaning towards building larger vessels.

“The debate on whether Russia needs any more ships in the 2000 ton displacement range continues, and while the experience of ship designs from early and mid-2000 may indicate that it clearly does not, Russian shipyards need to build something,” Kofman wrote.

Overall, the Russian fleet will grow and recapitalize at measured pace. Moscow is unlikely to embark on any fantastical projects like the Leader anytime soon. Modern Russia is not the Soviet Union and simply doesn’t have the kind of resources it once did during the Cold War. Thus, current day Russian navy modernization is more measured than was the case prior to the Soviet collapse.