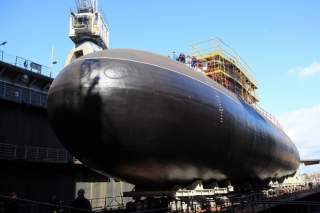 Russia expects to complete detailed design work on its of its next-generation Project Husky-class submarine within two years. That’s what United Shipbuilding Corporation (USC) officials told the Moscow-based TASS news agency earlier this week. However, the TASS report did not cite its source by name or offer direct quote.

Nonetheless, there some details that have emerged about the projected Husky-class follow-on to the Project 885M Yasen-class boats. For one, the new boats will come in two versions—which are being developed by the Malakhit Design Bureau—that will be based on a common hull design.

The primary difference will be in the two vessels’ weapon systems—the “interceptor” variant will not feature tubes to carry long-range anti-ship or cruise missiles. That version of submarine is expected to replace Project 971 Shchuka-B (NATO: Akula), the Project 945 Sierra and the remaining Project 671RTM Shchuka-class (NATO: Victor III) boats. The SSGN variant will replace the Project 949A Antey-class. The SSGN variant will also be armed with hypersonic Zircon cruise missiles.

The Russians are using the Project 855M Yasen-class as a starting point, but the new submarines will be smaller and cheaper than their Soviet-designed predecessors. Indeed, there are indications that Moscow will be extensively leveraging automation technologies developed for the Project 705 Lira-class attack submarine—better known in the West as the Alfa-class—for the new boats.

Russia will also incorporate composite structures in its next-generation follow-on to the Project 855M Yasen-class in the 2020s. The next-generation Russian nuclear submarines may use composite structures in an attempt to drastically reduce their acoustical signatures. But while the United States has used composite materials to reduce the weight, complexity and cost of parts for the Virginia-class submarine, the Russian efforts are far more ambitious. But this wouldn’t be the first time Moscow has experimented with novel materials to build submarines. Before its collapse, the Soviet Union pioneered the use of titanium hulls to increase the hydrodynamic performance of its boats.

The Russians hope to use composite materials for everything from the hull coating to the dive planes, rudders, stabilizers, propellers (or pumpjet propulsors), drive shafts and possibly even the hulls themselves. If the technology works, composite materials would greatly reduce the weight of various structures, increase the boat’s reliability and reduce operating costs. That’s because composites don’t corrode and thus wouldn’t need to be painted, Polovinkin said—reducing maintenance costs. Moreover, composite structures should simplify manufacturing by reducing part counts.

Question as always with Moscow’s ambitious new projects is how Moscow hopes to pay for them even if Russia has the technical wherewithal to develop the technologies.