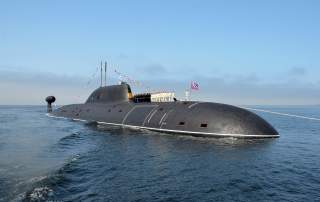 On Friday, the submarine, Knyaz Vladimir, set sail on its first venture. The sub is the first of five upgraded Borei-class submarines that Russia is building.

The Knyaz Vladimir displaces 24,000 tons while submerged and can also cruise at 29 knots while underwater. It stretches 558 feet in length and is 44 feet wide. It's operational diving depth is around 400 meters. Regarding its power system, Tass has reported: “The submarine is furnished with a single-shaft steam-turbine nuclear power plant with a capacity of about 50,000 horsepower developed by the Afrikantov Experimental Design Bureau for Mechanical Engineering (Nizhny Novgorod). The submarine’s OK-650V water-cooled and water-moderated reactor has a thermal capacity of 190 MW.”

According to Franz-Stefan Gady at The Diplomat, the major difference between the Borei-II and its predecessors is that the former is able to carry more weaponry. “In comparison to the Borei-class, Borei II[A]-class submarines are fitted with four additional missile tubes, boast smaller hulls and cons, and feature improved acoustics and lower sound levels, next to a number of other technical improvements,” he has written. Specifically, according to Gady, while the Borei-class submarines carry 16 Bulava (RSM-56) intercontinental ballistic missiles (ICBMs), the new subs will carry twenty ICBMs. Russian media outlets have also said that the new Borei-class subs will carry an enhanced version of the Bulava ICBMs. Each Bulava ICBM is capable of carrying six independently targetable warheads.

Russia ultimately aims to have eight Borei-class submarines, which will serve as the backbone of its sea-based strategic deterrent. Three of the Borei-class subs will be the earlier edition, while Moscow is building five of the more advanced vessels. Construction has begun on all five of the advanced models. The fifth and final sub is expected to be delivered by 2020 or 2021, although some observers expect significant delays. The Borei-class submarines will eventually replace Russia’s Project 941 Akula-class and Project 667 BDRM Delfin submarines, both of which became operational in the 1980s.

Traditionally, SSBNs have played a smaller role in Russia’s strategic deterrence compared with the sole subs play in America’s nuclear strategy. There are indications that this has begun to change in recent years, however. For starters, the Borei-class subs carry much more firepower than the boats they are replacing. While Russia’s older submarines carry sixteen missiles, those missiles only featured three or four warheads a piece, compared to the six warheads on the Bulava ICBMs. Notably, the increased number of warheads on Russia’s submarine-launched ballistic missiles (SLBMs) comes at a time when the overall number of nuclear warheads Moscow deploys is decreasing to comply with the terms of the New START Treaty.

Furthermore, Russian submarine patrols have increased markedly in recent years, although these patrols include attack submarines as well. For instance, in March 2015, Admiral Viktor Chirkov, the head of Russia’s Navy at the time, said that “from January 2014 to March 2015 the intensity of patrols by submarines has risen by almost 50 percent as compared to 2013.” Exactly a year later, another Russian navy official said that the nuclear-powered submarines in Russia's Northern Fleet were on patrol for 50 percent more days in 2015 than in 2014. Then, in March 2017, Admiral Vladimir Korolev, the Commander-in-Chief of the Russian Navy, claimed: “Last year, we returned to the level we had before the post-Soviet era in terms of the days at sea. Russia’s submarine fleet has spent 3,000 days at sea.”

The new SSBNs come at a time when Russia is overhauling its entire submarine force after years of neglect following the downfall of the Soviet Union. In recent years, Moscow has also unveiled the Yasen-class conventionally-armed nuclear-powered (SSGN) submarines. The Yasen-class submarines are 390 feet long and displace 13,800 tons. As Kyle Mizokami has noted on these pages:

Russia is also developing designs for fifth generation submarines under the Husky Project. Dave Majumdar has noted that under the Husky Project, “new submarines will be built in three variants—a basic attack submarine model, an expanded guided-missile submarine (SSGN) version and an enlarged ballistic missile submarine (SSBN).” This project is still in its infancy and very well might be hobbled by Russia’s burgeoning financial issues.