Russia's Nuclear Weapons: Everything You Always Wanted To Know (But Were Afraid To Ask) 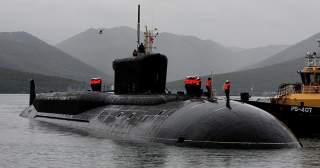