Russia's Only Aircraft Carrier Is Doomed 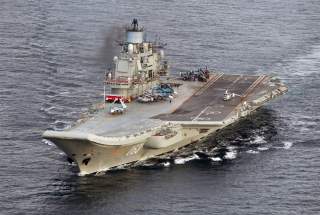 Russia’s only aircraft carrier, the aging Admiral Kuznetsov, is in big trouble.

This week, a Russian-language report in Interfax disclosed that Russia has cut in half funding for repairing and modernization its aircraft carrier. “Instead of [the] previously planned approximately 50 billion rubles [$867 million] for the work, it is planned to allocate about half of the previously announced amount,” Interfax reported, citing a source “familiar” with the situation.

The same source said that the budgetary problems has forced Russia to abandon plans to modernize the carrier, and instead Moscow will only proceed with the previously planned repairs. These will primarily focus on fixing the vessel's propulsion system, the report added. This is the absolute minimum Russia can do to avoid completely scrapping the ship: the  propulsion system has been so unreliable that the carrier must be accompanied at all times by a large, ocean-going tug ship in case it breaks down (again).

The decision to forgo modernization did not come completely out of the blue. The National Interest’s David Majumdar reported back in July that Moscow was considering scaling back its modernization plans. At that time, however, Russian officials claimed this decision had been made in order to have the carrier back in the fleet as soon as possible

The extensive modernization of the carrier was expected to last until 2020. Previously, Russian media had said this modernization would consist of equipping the ship with “modern systems of electronic warfare, communication, intelligence, navigation and combat control. Aside from this, new control systems for safe carrier-based aircraft landing will be installed. The composite air wing personnel will remain unchanged.” The same reports said there would be “structural” changes to the ship’s weapon systems.

Moscow’s decision to forgo this modernization means the aircraft carrier will have limited effectiveness in the future. As The Drive’s Tyler Rogoway noted, “Without major upgrades to the ship's combat systems, its ability to fight and survive in anything but low threat, permissive environments will be put in question.”

The ship’s experience to date has been anything but encouraging. Although the ship was commissioned in 1990, its first combat mission wasn’t until last year when Russia deployed it off the coast of Syria to participate in Moscow’s campaign to prop up the Bashar al-Assad regime. It did not go well. In a one month period two planes flying from the aircraft carrier crashed. As Russian and other naval analysts noted at the time, these mishaps occurred in part because the carrier wasn’t meant to participate in prolonged campaigns. “It’s a very old ship with very old technologies. It is not prepared for intensive flights,” is how one Russian analyst explained it to the Washington Post.

Given this track record and the vessel’s limited capabilities, it is hard to see why Russia is bothering to repair the carrier at all. As Rogoway reasonably points out, the roughly $400 million Russia will spend repairing the carrier could be better used on other weapons systems. From all appearances, Moscow primarily uses the carrier as a status symbol. As Foreign Policy pointed out at the time of the Syrian deployment, “Deploying an operational aircraft carrier, no matter how star-crossed, makes Russia a member of an exclusive club: the only other countries with big-deck naval aviation capability today are the United States, France, and, to a limited extent, China.”

The carrier doesn’t even perform this status mission well, however. In fact, it has been a long-standing punch line in defense circles and international media. To cite just one example, Foxtrot Alpha has said: “In case you haven’t heard, the Admiral Kuznetsov is a broken down, black smoke exhausting piece of sh*t that should have been decommissioned years ago.” Foreign Policy has reported, “The last time Russia’s sole aircraft carrier sailed into the Mediterranean Sea, five years ago, the U.S. Navy’s 6th Fleet kept a close eye on its progress. The concern among American officers wasn’t the ship’s contingent of fighter planes; instead, it was the very real worry it would sink and necessitate a potentially risky rescue operation.” Thus, the ship is more of a symbol of embarrassment to Russia.

The decision to scrap the Admiral Kuznetsov’s modernization further reinforces the perception that Russia’s plans to build a “supercarrier” are not very serious. The proposed new carrier will be powered by two RITM-200 nuclear engines and displace one hundred thousand tons. This is nearly twice the weight of Russia’s only existing aircraft carrier. It will also allegedly be able to carry 90 aircraft, roughly sixty more than the Admiral Kuznetsov.

In July, I argued that the prospect of a Russian supercarrier seems like a pipe dream. Among the reasons I gave was that building such a ship would be prohibitively expensive at a time when Moscow is reducing its military spending. It now seems even more like a fantasy.