Russia's Only Aircraft Carrier Has a Big Problem 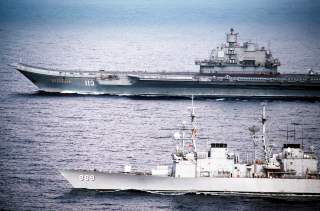 The Russian Navy will repair its sole aircraft carrier Admiral Kuznetsov, but the massive vessel will not be upgraded or modernized in any meaningful way. Instead, Russia will focus on getting the carrier back into the fleet as soon as possible when the ship goes into overhaul next year in 2018.

“It is a ship repair with replacement of some equipment." Sergei Vlasov, director general of Nevsky PKB told the TASS news agency.

"Essentially, there is no modernization.”

It will take the shipyard between two to three years to repair Kuznetsov depending on the scope of the work.

Vlasov noted that while the shipyard has completed technical plans to perform the repairs, there is no timeline in place to implement those fixes because a contract has yet to be signed with the Russian Defense Ministry.

One of the reasons that the Kremlin is not authorizing a much more extensive modernization of Russia’s sole aircraft carrier is because the ship needs to be back in the fleet quickly. A deep modernization might drag on for more than ten years given the state of Russian shipyards.

Russia cannot afford to be without Kuznetsov in the fleet for that long because it would lose expertise in other related areas such as carrier operations at sea—highlighting one of the problems of owning only one vessel of a type.

“It's clear why, because modernization risks dragging on for 10 years and costing a lot of money,” researcher Mikhail Barabanov, editor of the Moscow Defense Brief—published by the Centre for the Analysis of Strategies and Technologies (CAST)—told The National Interest.

“Since Kuznetsov is not so much a combat platform as a training platform, deep modernization for her is an obvious excess.”

Vasily Kashin, a senior fellow at the Center for Comprehensive European and International Studies at Moscow’s Higher School of Economics, agreed.

“Because a real modernization is likely to take much longer and the ship may be needed,” Kashin told The National Interest.

Kuznetsov is an old design that dates back to the late Soviet-era and at some point she will have to be replaced. However, a new Russian carrier is mostly a theoretical discussion at this point because Moscow currently lacks the resources to build such vessels until at least 2025.

“Currently it is obvious that Russia is unlikely to start building a second carrier before 2025 and that means that it is not likely to be operational before the early 2030s,” Kashin said.

“The situation is a bit like in the Soviet Union of the early period. The USSR did not really have the resources for an ocean going navy before the late 1960s, because of other challenges that were more important. As a result, the old battleships of the Russian Imperial Navy—the two of them which survived WWI and WWII—served until 1956.”

Indeed, during the early part of the Cold War, the Soviet Union—still rebuilding from the immense destruction inflicted upon her by Nazi Germany—retained a host of Imperial-era surface combatants well into the 1950s. “Some of the old cruisers and destroyers were used until late 1940s and early 1950s—30-40 years after the revolution,” Kashin said.

In any case, it is hard to say what the outlook might be for a future Russian aircraft carrier even post-2025.

“I think before 2025 this issue will be purely theoretical,” Barabanov said.

“In 2025 it is not known what will happen, so you cannot predict anything. But I think that for Russia, strategic forces, space capabilities or anti-missile defense are more important than aircraft carriers from a resource point of view.”

Indeed, conceptual designs from the Krylov State Research Center such as the much-vaunted Project 23000E Storm are mostly industry attempts at lobbying the Kremlin to fund their program—the Russian term for which is samopiar or “self-PR”. It is very similar to how U.S. industry will dream up a new project and then convince the Pentagon to fund the development of the new product—examples include EA-18G Growler, which originated as a Boeing concept.

“I think that currently they have these designs, but we do not know which trends will prevail in such distant future,” Kashin said.

“It is quite possible carriers will be considered obsolete by that time or the requirements will change.”