Russia's PAK-DP Interceptor: The Unmanned Plane that Could Replace the MiG-31? 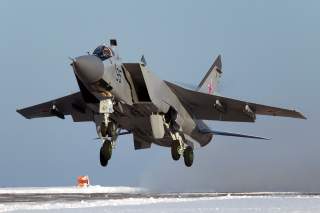 Russian Aircraft Corporation MiG expects that it will likely develop an unmanned version of its forthcoming PAK-DP replacement for the Mikoyan MiG-31 interceptor in the future.

However, there are questions as to if the PAK-DP will ever materialize or if it will continue to remain an aspiration. Indeed, it is not clear if MiG—known during the Soviet-era as the Mikoyan Gurevich design bureau—will survive as an independent unit within Russia’s United Aircraft Corporation umbrella company. Indeed, MiG might be taken over by archrival Sukhoi, which has dominated Russia’s fighter market since the fall of the Soviet Union.

"It will be a brand new plane that will use brand new technologies for operation in the arctic conditions,” MiG chief executive officer Ilya Tarasenko told the TASS news agency at the Army-2017 tradeshow outside Moscow.

“This plane will defend the borders of our Motherland. Then an unmanned version will be transformed into a project."

The TASS report notes that the PAK-DP would not start development until 2019 at the earliest according to Russian Aerospace Forces commander-in-chief Col. Gen. Viktor Bondarev. Indeed, if a PAK-DP program does emerge, it likely won’t be until the mid-2020s.

“I think that taking into account the existing constraints, it is unlikely that something will emerge before 2023-25,” Vasily Kashin, a senior fellow at the Center for Comprehensive European and International Studies at Moscow’s Higher School of Economics told The National Interest.

“We first need to establish mass production of the PAK-FA.”

Samuel Bendett, a researcher specializing in the Russian military at the Center for Naval Analyses agreed.

“It’s tough to say at this point—its development will require major resources by the Ministry of Defense,” Bendett told The National Interest.

“Russia has indicated that it’s moving towards stealth and unmanned designs, but that is an expensive undertaking even for wealthy militaries like the United States.”

Bendett noted that Russia has just started to manufacture the PAK-FA. Meanwhile, the PAK-DA remains a concept. Moreover, converting a manned aircraft into an unmanned aircraft is not a small feat.

“Converting existing manned planes into unmanned versions requires significant technical commitment and resources, which are currently in short supply across Russia when it comes to advanced UAV technology,” Bendett said.

“For example, in this announcement, Tarasenko said that the MiG Corporation manufactures medium and heavy unmanned aerial vehicles—that is not factually correct, since MiG had several projects on its drawing board for years, such as the Skat UCAV that never came to fruition and has since morphed into the Ohotnik project jointly led by Sukhoi and MiG design bureaus.”

Indeed, even if Russia does proceed with the PAK-DP project, it is unclear if MiG will survive long enough as an independent entity to partake in the program. Sukhoi is thought to be making a play to takeover the storied MiG Corporation, which despite its illustrious history, has fallen on hard times in the post-Soviet era.

“They will be lucky to remain an independent design bureau,” Michael Kofman, a research scientist specializing in Russian military affairs at the Center for Naval Analyses, told The National Interest.