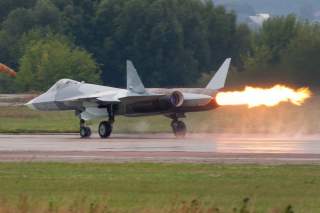 The PAK FA has played the bugbear for Western air forces for nearly a decade, the terrifying Russian jet that will eat F-35s for breakfast. American aviation analysts in search of something, anything that might threaten U.S. air dominance settled on the PAK FA, a frankly evil looking jet that bore a very mild resemblance to the MiG-31 “Firefox” that Clint Eastwood made famous.