Russia's RS-28 Sarmat Nuclear Missile Could Wipe Out an Area the Size of France (But Is it Overkill?) 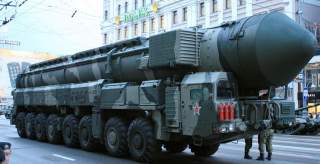