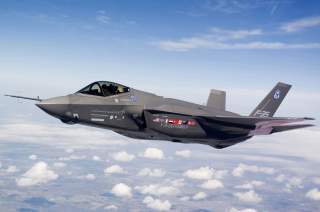 The Pentagon is casting doubt on the effectiveness of Russian-made air defense systems.

The Pentagon’s move appears to be aimed at deterring Turkey from purchasing the Russian-made S-400. However, the Pentagon’s statements call into question why the United States and its allies are investing hundreds of billions of dollars into stealth aircraft and stealthy long-range cruise missiles if Russian-made surface-to-air weapons are completely ineffective. Until the Pentagon’s April 19 press briefing, the Defense Department would routinely scaremonger how the S-400 would effectively turn an area into an anti-access/area denial (A2/AD) bubble.

The Pentagon noted that all allied missiles hit their targets inside Syria during the April 13 raid—despite the Russians’ patently ridiculous assertions that the Syrians shot down the majority of the incoming missiles. “Following our operations, Russia falsely claimed Syria air defenses shot down a significant number of missiles, when in fact we hit all of our targets,” Pentagon Chief spokesperson Dana W. White told reporters on April 19. “Of the surface-to-air missiles that the Assad regime launched, nearly every one was launched after the last of our missiles hit their targets.”

Joint Staff Director Lt. Gen. Kenneth F. McKenzie Jr. walked those comments back somewhat. McKenzie noted that Russian air defenses were active during the American-led attack on Syria, but did not attempt to engage the incoming attack. “In the attack on Friday night, Russian air defenses were energized,” McKenzie said. “They were scanning, they had a [Beriev A-50] Mainstay air defense aircraft up. They did not choose to engage, so I can't speculate about why they did or didn't do that.”

However, McKenzie stood by the comment that Russian-made air defenses were ineffective—but allowed that there is a difference between the antiquated systems operated by the Syrians and those used by the Kremlin’s own forces. “I can tell you though that the rest of Syrian air defense capability, which is completely Russian made, Russian designed, Russian supported, engaged extensively and comprehensively failed,” McKenzie said. “So I think there's a distinction there, and I recognize that. The Russians didn't do anything, although they're very closely allied to all the systems that the Syrians deployed to no effect.”

McKenzie and White’s comments seem to be implicitly aimed at Turkey, a wayward NATO ally that the United States is trying to convince to forego purchasing the Russian S-400 Triumph system. “We have talked to the Turks about the issue of interoperability,” White said. “But ultimately the Turks have to decide what's in their best strategic interest, and that's for Ankara to determine.”

If we accept the Pentagon’s assertion that Russian air defenses are completely ineffective, then why is the United States investing hundreds of billions of dollars into stealth technology? The argument used to justify the outrageous cost of stealth aircraft simply evaporates since the threat they were built to counter does not exist.

Thus far, the Northrop Grumman B-2 Spirit has cost more than $45 billion and the Lockheed Martin F-22 Raptor has cost almost $67 billion to develop and field. Meanwhile, Lockheed Martin’s F-35 Joint Strike Fighter program is set to cost $406 billion and the Northrop Grumman B-21 is set to cost at least $56 billion—but the Air Force refuses to release cost figures for the Raider. And none of these numbers includes sustainment costs for these aircraft.

In addition to the aircraft, the Pentagon continues to invest in stealthy cruise missiles such as the JASSM-ER, the future Long Range Standoff (LRSO) weapon and a host of other long-range missiles to overcome enemy—overwhelmingly Russian-built—air defenses. What is the point if Russian-built air defenses—which are used by the overwhelming majority of threats—are useless? Even the Chinese largely use copies of Moscow’s hardware.

For the next House or Senate Armed Services Committee hearing, expect leaders from the Pentagon to sound the alarm over the threat posed by the S-300, S-400 and other Russian-made air defenses to justify their programs and budgets. There will undoubtedly be much hand wringing about A2/AD bubbles in Kaliningrad or Crimea or elsewhere. The cycle will begin anew.