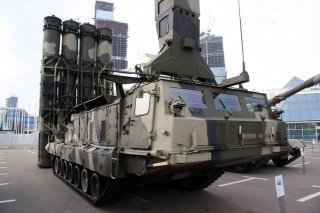 It’s been widely reported that Russian President Vladimir Putin has decided to sell the Russian-made S-300 missile system to Iran. This sale has been planned for years, but it was put on hold in 2010 when the U.N. Security Council adopted Resolution 1929. Although this resolution did not specifically prohibit the sale of missile systems like the S-300, it did call for all states to “exercise vigilance and restraint” in supplying weapons to Iran. Since then, Russia has refrained from selling these weapons. Now Russia has changed its mind.

The S-300 is a mobile surface-to-air missile defense system that couples powerful radars with high-speed, long-range missiles. It is capable of shooting down aircraft over a large area (depending on the variant, the lethal engagement zone could be larger than the state of New Jersey…with the detection/tracking zone much larger than that). In NATO, we refer to this missile system as the SA-10. We have studied it and trained to counter it for years. While we are not scared of it, we respect the S-300 for what it is: a very mobile, accurate, and lethal missile system.

Russia’s decision to sell the S-300 to Iran is a big deal for three reasons:

1. It represents a fundamental shift in military power for the region:

For over a decade, the United States and its allies have been able to take freedom of action in the Middle Eastern skies for granted. Friendly forces could count on air support and freedom of maneuver. Adversaries could assume they were vulnerable to observation and attack from the air, limiting their options and convincing some of them that they could not achieve their objectives through military force (often called deterrence by denial). This was especially true of Iran, whose air defenses have suffered greatly due to sanctions. The arrival of the S-300 changes this.

The S-300 is not a wall in the sky. If we have to, we can attack and defeat it. Doing so, however, requires an effort that is much larger, much riskier, and much more costly. Recently, we have seen a debate on the scale of a potential attack on Iranian nuclear facilities, with some arguing that it would be relatively limited and others taking an opposing view. With the S-300 in place, there is no debate. Overcoming this type of system will require a large deployment of air, sea, and land assets, including our most capable—and expensive—airplanes and missiles. Our people and equipment will be at greater risk, and accomplishing the mission will be more difficult and time consuming.

2.  It represents a major acceleration in the proliferation of A2/AD systems:

In 2003, Andrew Krepinevich, Barry Watts, and Robert Work warned against the proliferation of threats like the S-300 in a study published by the Center for Strategic and Budgetary Analysis that coined the phrase “Anti-Access/Area-Denial,” or A2/AD. They argued that states such as Iran and North Korea would acquire capable systems like the S-300, forcing the United States to alter its approach to projecting military power. That day appears to be here. This is why many officials, including Work—who is now the Deputy Secretary of Defense—have called for the development of new technological approaches to “offset” advanced weapons systems like the S-300. Some have argued that this effort is aimed directly at China, but the proliferation of the S-300 demonstrates how A2/AD environments are spreading.

3.  It represents the return to an age of geopolitical competition:

We may not want to go back to the days when every world development had to be viewed in light of a political competition with another great power. It is increasingly clear, however, that Russia sees the world through this lens. Western sanctions—implemented in response to Russian intervention in Ukraine—have imposed significant costs on the Russian economy and ratcheted up the tension between Russia and the West. It now appears that tension has spilled over into the Iranian situation. With the upcoming sale of the S-300 to Iran, Russia has found a way to increase our costs dramatically should we deem it necessary to intervene there.

The training required to prepare against an S-300 threat is exactly the type that has been so damaged by the sequester cuts of 2013 and the budget caps of 2014/2015. Recently, Secretary of the Air Force Deborah James stated that half of Air Force combat units are not trained to the level necessary for the “high-end fight.” In light of proliferation developments such as this Russian deal with Iran, that is not a reassuring statistic.

Colonel Clint Hinote, U.S. Air Force, is a military fellow at the Council on Foreign Relations. He holds a PhD in military strategy, and he recently returned from Korea, where he commanded the 8th Fighter Wing at Kunsan Air Base.  The conclusions and opinions expressed are his own and do not reflect the official position of the U.S. government.

This piece first appeared in the CFR Blog Defense in Depth here.