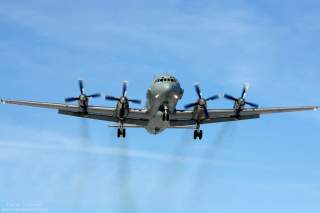 Russia’s electronic spies have become a key part of Moscow’s surge into Syria. The signal spooks are searching for targets and following up on air strikes.

On Sept. 30, Russian fighter-bombers and ground attackers began launching aerial attacks across the embattled country. On Oct. 7, the Kremlin announced that four warships in the Caspian Sea had lobbed nearly 30 cruise missiles—which zipped through Iranian and Iraqi airspace to reach their final destinations—as part of the ongoing offensive.

And since the beginning, the Kremlin’s spy planes and other intelligence gathering systems appear to have been keeping watch.

“Earlier featured footage of #ISIS vehicles destruction is now confirmed by militants radio talks and other reconnaissance sources,” reads the caption of an official Russian Ministry of Defense video showing an Su-24M Fencer carrying out a strike—seen below—uploaded to YouTube on Oct. 5. “Near Kafar Aouid two Su-25 engaged an ISIS field camp, where radio recon proved presence of foreign militants,” Russian authorities posted on Twitter the next day.

While Moscow has not identified its reconnaissance platforms, pictures of Russian Il-20M Coots flying over the battlefield have popped up on social media. Based on the Ilyushin Il-18 turboprop airliner, these four-engined planes are rough equivalents to the U.S. Air Force’s family of RC-135 aerial spies.

David Cenciotti, an independent journalist, noted the deployment and explained some of the Il-20’s capabilities on his blog The Aviationist before the Russian strikes actually kicked off:

Along with the 28 combat planes that have arrived at al-Assad International Airport via Iran hiding under Il-76 cargo planes last week, the Russian Air Force has deployed at least one Il-20 Coot surveillance plane to Syria.Even though satellite imagery has not yet unveiled its presence on an apron at the airfield near Latakia, an Il-20 Coot spyplane has already arrived in Syria to reinforce the Russian contingent, according to one of our sources.

The Il-20 is an ELINT (Electronic Intelligence) platform: it is equipped with a wide array of antennas, IR (Infrared) and Optical sensors, a SLAR (Side-Looking Airborne Radar) and satellite communication equipment for real-time data sharing, the aircraft is Russian Air Force’s premiere spyplane.

Cenciotti pointed out that the Coots have a habit of flying with their transponders off over the Baltic Sea. This has led to a number of close encounters with civilian planes, and similar habits could be equally dangerous in Syria’s increasingly congested skies.

But flying spooks aren’t the only spy gear Russia is sending to the region. Earlier in October, a number of Russian media outlets reported that the spy ship Vasiliy Nikititch Tatischev was on its way to help in Syria.

A Russian military source said that the Russian ship Vasily Tatishchev left the Baltic Sea heading towards the eastern side of the Mediterranean.

The military source told reporters in the city of Kaliningrad on Monday that the ship headed towards the Syrian coast where it will join a group of ships in the eastern side of the Mediterranean to enhance capacities in accordance with their specialized tasks.

The ship’s crew will observe the situation and monitor its details in the Syrian airspace as well as in the spaces of all the surrounding countries and regional water, the source added.

The source stressed that such a trip by ships from the Baltic Sea Fleet is a normal routine mission for monitoring and observing, pointing out that those ships once successfully monitored the war in Yugoslavia.

Despite these assurances, Vasiliy Nikititch Tatischev‘s appearance in the area seems anything but routine. Built for the Soviet navy in the 1980s, the seven Project 864 Vishnya-class vessels are purpose-built to scoop up radio chatter and other electronic information. With Moscow highlighting the use of signals intelligence, it’s unlikely the 3,400-ton ships are there to simply monitor the situation.

Russia has a long history of supporting the Syrian government with signals snooping. In October 2014, the Free Syrian Army fighters uploaded a video to YouTube claiming to show them in control of a shared Russian-Syrian intelligence facility identified as “Center S.”

The Oyrx Blog, an independent entity that monitors and analyzes social media postings relating to the conflict, dug into the video:

On the 5th of October 2014, the Free Syrian Army captured the … Center S SIGINT (Signals Intelligence) facility … jointly operated by the Russian Osnaz GRU radio electronic intelligence agency and one of the Syrian Intelligence Agencies … Situated near al-Hara, the facility was of vital importance for the Assad regime as it was responsible for recording and decrypting radio communications from every rebel group operating inside Syria, making it likely the Russian-gathered information at this facility was at least partially responsible for the series of killings of rebel leaders by airstrikes.

Translation from 3:08; “A directive issued by the surveillance office on May 31 to eavesdrop and record all radio communications of the terrorist groups, directive signed by Brig. Gen. Nazir Fuddah, commander of the first center.”

The facility was recently upgraded and expanded by Russia to provide Syria and Iran with situational awareness of the Middle East. After the upgrade, which took from January to mid-February, it reportedly covered the whole of Israel and Jordan and a large part of Saudi Arabia. According to the report, the upgrade was a reaction to Iranian concern of the facility being too much focused on the Syrian Civil War, neglecting espionage on Israel. New equipment and additional personnel was thus added to the base. As only static and worn out looking sensors were captured, the more modern equipment and Russian personnel were undoubtedly evecuated [sic] days or weeks before.

The Kremlin’s deployment of the Coots and the Vasiliy Nikititch Tatischev will perhaps make up for the loss of land-based outposts. Whatever the case, Moscow’s electronic spies will no doubt be busy for the foreseeable future.

Joseph Trevithick is a contributing author for War Is Boring.

Editor’s Note: This piece was originally published on War Is Boring. You can find it here.