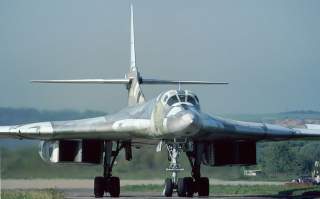 Speaking at the Samara-based Kuznetsov Plant of the United Engine Corporation, a Russian defense company, Russian Deputy Defense Minister Yuri Borisov told reporters that production of the PAK DA has been delayed in order to resume producing Tupolev Tu-160M2 bomber.

“According to the plans, serial production of the [Tu-160] aircraft new version [the Tu-160M2] is to be implemented starting from 2023,” Borisov said.

When asked whether this would shift the timeframe of the PAK DA strategic bomber, Borisov confirmed that it would. “The PAK DA project will be somewhat shifted beyond [2023, when it is currently to begin entering service], otherwise there is no sense in it,” Borisov said.

As The National Interest previously noted, back in May Russian Defense Minister Sergei Shoigu announced that Russia had decided to resume production of the Soviet-era Tu-160 nuclear bomber, which NATO refers to as Blackjack.

Russia later revealed that the decision to restart production of the Blackjack bomber was made directly by Russian President Vladimir Putin. “The supreme commander [president of Russia] and the Russian defense minister have taken a decision on reviving production of the Tu-160M aircraft,” Col. Gen. Viktor Bondarev, the commander-in-chief of Russia’s Air Force, said in late May.

The decision to restart production on the Tu-160 was made in part because of production delays in the PAK DA.

However, Bondarev previously denied that the decision to restart production of the Tu-160s would delay delivery of the fifth-generation PAK DA bombers, as both would be produced simultaneously. "Of course, we have no right to do it otherwise," he said in response to a question about whether the two planes could be produced at the same time.

Borisov’s comments last week seem to directly contradict that, as the PAK DA bomber program will experience more delays in direct relation to the decision to restart the Tu-160 bomber production.

Borisov also recently told Vladimir Putin that other aspects of Russia’s military modernization program will experience delays as a result of international sanctions. “The objective reasons for the failure to meet state defense procurement orders include restrictions on the supply of imported parts and materials in connection with sanctions, discontinuation of production and the loss of an array of technologies, insufficient production facilities," Borisov told Putin by phone, according to a transcript made available by the Kremlin.

The Moscow Times reported that the programs that have experienced a delay as a result of sanctions include: “production of Navy guard ships, Beriyev Be-200 amphibious aircraft, Vikhr anti-tank missiles, remote control and radio monitoring equipment for Igla surface-to-air missiles, and weapon launch systems for Tupolev-160 strategic bomber planes.”

It’s also possible that the PAK DA strategic bomber will never seen the light of day. After all, the newly produced Tu-160 strategic bombers will incorporate a number of upgrades that will give them some of the capabilities envisioned for the PAK DA.

The new Blackjacks are also expected to have a service life of around 40 years, which will give Russia some breathing room with regards to the aerial leg of its nuclear triad. Amid tightening budgets, its possible Russia could scrap the whole PAK DA program in general in order to make room for other more pressing defense needs. At this time, however, this all remains speculation.