Russia's Su-57 Deployment in Syria Is a Dangerous Farce 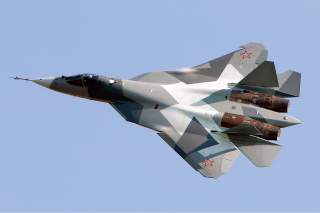 Late in the evening on Feb. 21, 2018, a photograph appeared on social media purportedly showing two Russian Sukhoi T-50 prototype stealth fighters — also known as PAK-FAs or Su-57s — in the sky over Hmemmem air base in western Syria.

While the photograph was rather blurry and could not be precisely geo-located, by the morning of Feb. 22 two videos appeared on the same social media depicting almost the same scene. A pair of T-50s escorted by an Su-35 interceptor. The authenticity of the photo and videos is still in question.

But if T-50s are in Syria, it’ll be interesting to see how the Kremlin spins the deployment. Back in November 2017, Russian president Vladimir Putin ordered most of the Russian military contingent in Syria to withdraw, two years after Moscow intervened in the ongoing regional war.

In other words, the T-50s’ deployment could be further proof that Putin’s withdrawal order was a lie.

In any event, the stealth fighters’ presence in Syria raises other questions.

The T-50 program has suffered a number of long delays since the type’s first flight in 2010. Early on, Russian officials announced that the type would undergo state acceptance trials in 2013 and enter operational service in 2015. That didn’t happen. By 2013, the plan was for the T-50 to enter production in late 2016.

To that end, in 2016 the Tikhomirov Scientific Research Institute of Instrument Design completed seven N036 radars designed for T-50s, three of which were installed on prototypes T-50-3, T-50-4 and T-50-5. All of these were in so-called “reduced configuration,” which means they had only a front-facing antenna and lacked the side-looking arrays. There has been no testing of the T-50’s fire-control system nor any kind of live weapons trials for the type.

On the contrary, the T-50 has suffered one failure after another. Most of the first five prototypes have developed severe structural problems, engine breakdowns and mishaps with cockpit glazing. India had agreed to co-finance the T-50, but well-placed Indian sources reported that the T-50’s engines were unreliable, its radar inadequate and its stealth features badly engineered.

Unsurprisingly, Moscow and Sukhoi failed to agree on further Indian financing. The Indians have instead asked for information from the United States regarding its F-35 stealth fighter.

Sukhoi rushed five available T-50 prototypes to the air force’s State Flight Center Base No. 929 at Akthubinsk in September 2016 to have them flight-tested by Russian military pilots. Rumor has it that in the same year, one of the T-50s released a weapon of unknown type from one of its internal stations for the first time. However, no testing was ever confirmed. The prototypes have only appeared carrying dumb bombs or dummy R-77 air-to-air missiles on underwing pylons.

Later in 2017, Mikhail Pogosian, CEO of United Aircraft Company – the consortium controlling Sukhoi and all of the Russian aviation industry – left his position. Pogosian was the only UAC director with industrial management skills. To say that this collapsed the entire T-50 project would be an understatement. The Ministry of Defense in Moscow in late 2017 slashed T-50 procurement to just 12 copies for now.

These 12 prototypes are supposed to undergo further research and development … by 2025. Considering that Sukhoi has already assembled at least 10 of these, this means that production has essentially been terminated.

In reportedly deploying T-50s, the Kremlin is outright gambling with precious prototypes and their pilots’ lives. It has sent into an active combat zone two supposedly “stealth” fighters that are anything but stealthy, that possess inadequate and incomplete sensors, incomplete fire-control systems and self-protection suites, no operational integrated avionics and are powered by unreliable engines. They have undertaken hardly any weapons-separation testing except for two types of free-fall dumb bombs and lack any other operational weapons bar their 30-millimeter internal cannons.

On the top of that, the aircraft are then going to be flown by pilots who lack any kind of doctrine or tactics for the type and who cannot really depend upon the planes’ avionics and other systems.